I promised a month of Joes, and that's exactly what you're getting. I've yet to decided how it will go down, but expect anything from character profiles to philosophical topics, and maybe even some food related entries. Quite a few articles will remind you of the Figure Friday style - where I focus on a specific toy, and throw in a few anecdotes.

After Monday's huge article on the hundred best G.I. Joe figures, I thought it would be better to have a more easily read article, focusing on a tiny vehicle I find incredibly fun. Because good things will come in all sizes! 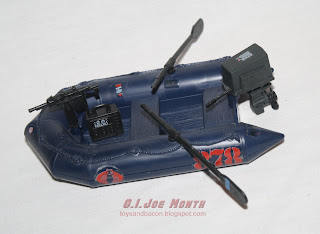 Read on for Cobra Night Landing!

I don't mind big vehicles. In fact, I love them!
Who doesn't?

I remember receiving the Phantom X-19 as a kid, and I vividly remember the box being bigger than me. Looking back at it, I know that in fact it wasn't, but it felt like that. And did I ever love that huge plane!
Same with vehicles like the Hammerhead, W.H.A.L.E, Thunderclap and Moray hydrofoil. All enormous toys with a massive amount of play value.
Rest assured, I will write articles on them all!

But can one claim that the bigger the vehicle, the better it was?

Well, to answer that, I will use eggs as an example. I've told about the eggs I buy before. I get them from a local farmer, and they are very randomly sized - unlike the eggs you buy in a supermarket, that are sorted to have a more standard size.
It's a plus that the eggs from the farmer are slightly bigger than the supermarket eggs, but it's by no means the reason I buy them. I buy them for freshness, quality and price.
Most of the eggs are around 70 grams, some may be down towards 60, some may be as high as 80. While store bought are around 60. Size is of a lesser concern, it's not why I buy the farmer's eggs. 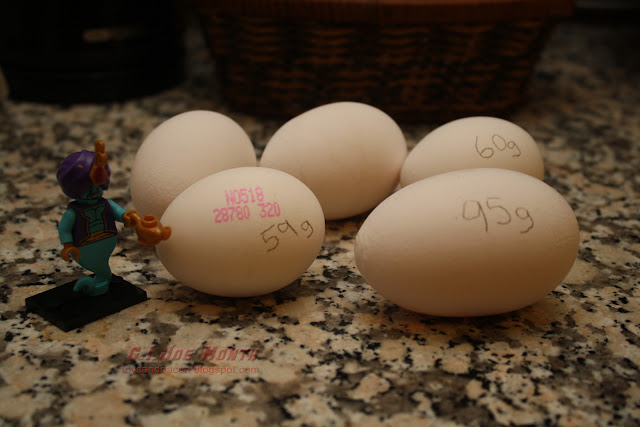 The one with the print is a store bought, the other four are from the farmer.
Like with the Joe vehicles, I get really excited over the gigantic egg.
But I still love the freshness and taste of the smaller ones too.

From the beginning in 1980, and particularly in the mid 80s, we saw tons of small vehicles and tiny playsets in the G.I. Joe line. They were cheap, often cheaper than single figures. And they added an intense amount of play value.
These small separately sold playsets and vehicles are very rare in today's action figure lines. The toy manufacturers instead sell the main characters with several different accessories and small playsets - leaving the kids with multiple identical toys.

Back in the day, in the G.I. Joe line, it was possible to buy a tent for Alpine's secret mission, or several tents for all the Joes.

One of my favorite small vehicles was the Cobra Night Landing.
It's a small boat, very realistic. Came with quite the handful of accessories (knife, gun, mounted gun, shovel, oars, radio), and is properly scale (albeit on the smaller side). I own a couple of these boats, because they are incredibly versatile in playing out scenarios. When ever Cobra had a mission of some sort, and water was involved, they brought a couple of Night Landing crafts.
I used the Night Landing more often than I used the Phantom X-19. I guess it was a bit situational. Sometimes it was fun bringing out the big stuff. But for normal play, it was definitely more convenient to have a couple of figures and a few small vehicles. 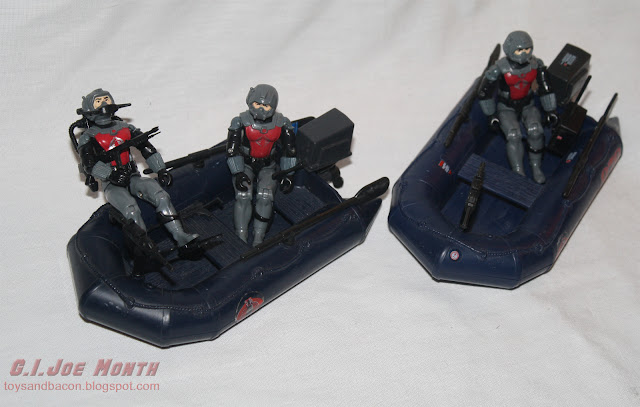 The big boats, planes and road moving 500mm cannons are impressive, and it's something you love placing out on the playfield on occasion. Just like the massive 95 gram egg. It's a great addition to the collection of normal sized eggs. But for every day use, you're satisfied with a more modest size - as long as the quality is there.

The Night Landing has that quality. It's tiny, yet awesome. It adds tons of play value, and you could easily have several of them, as they cost almost less than a figure.

So, yes. Size matters. But when it comes to G.I. Joe vehicle, I'm still undecided on the question if bigger is the same as better. It's probably a combination.
Posted by Jon at 2:02 PM

I liked to swap factions with it quite a bit.

The raft was really fun, I liked to "tie down" on one of the bigger vehicles, like Moray or Killer WHALE, and instead of an all out big battle, I would have some covert or recon. style mission with just a handle of figures while the larger machines engaged in their own battle.

I very much agree with the statement you made about the variety and amount of smaller vehicles and sets (like a tent) that helped add a whole lot more "action" to play-adventure compared to what we get in this modern-era of toys.