Stepping just a bit too far out of bounds when it came to the quasi-futuristic theme of G.I. Joe, the sub-team Battle Force 2000 is slightly controversial among collectors. I love them of course, and as you saw in in my list of the Top 100 Joes, BF2k ended up in the top 50. 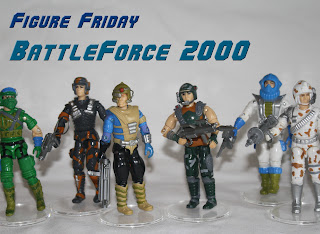 But I never had the full team, until now...

Read on for Figure Friday on the unfortunate Battle Force 2000! 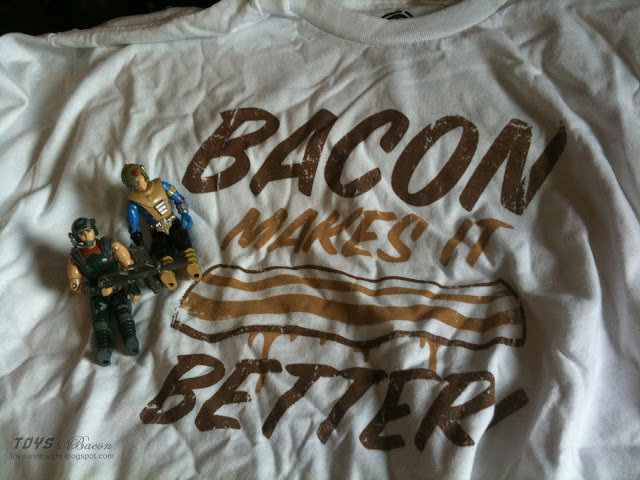 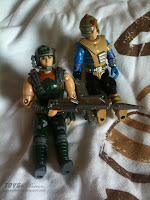 I got a package in the mail. It was birthday gifts from my Texan friend James. A bacon t-shirt and two figures I was missing in my collection. This is me getting straight to the point, but I can tell you I was surprised, and happy. A great gift, but also a gift with an idea behind it. The best kind, when you know someone has made an effort to get you something that matters.
The t-shirt fits in with the theme of my blog, and Jimmy had obviously read the list, where I mention I'm missing Dodger and Knockdown.

So here I am, with a complete collection of Battle Force 2000. Thanks, buddy!

But why is this a big deal? Well, G.I. Joe - A real American Hero was from the start based on a combination of military realism and experimental prototypes. Some of it was very realistic, like the initial idea of the green army guys. But then you had mixed in stuff like a laser trooper and jet packs. This continued, and to a certain degree it escalated through out the years, ending up with G.I. Joe and Cobra going to space, battling an alien empire.

But for most of the time, it was fringe technology, something that was plausible, something that was based on actual military prototypes.
Many Joe collectors romanticize the traditional military aspect of the franchise, and view it as the most important part. While others embrace the sci-fi, the otherworldly, the often ridiculous but always awesome parts of G.I. Joe. Don't get me wrong, I love the good old fashioned army dudes. But I also love me some ninjas, space guys, robots and monsters. It is toys after all, and toys are meant to be fun.

Battle Force 2000 should have been fun, and by (almost) all accounts, the toys were fun. But in the comic, they had a rough start, and a tragic end.

Battle Force 2000 was introduced in issue 68 of the Marvel comics, and when we first see the team, they are fighting. Fighting each other. But they also end up saving Hawk and Iceberg with their high tech equipment and vehicles. 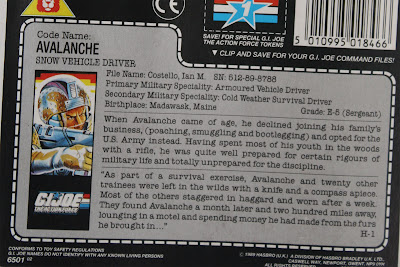 And we get to see their base, which is made by combining parts from their vehicles.
This is an interesting part of the BF2k. You see, they were actually vehicle drivers, and on their respective cards, they are listed as such. But the vehicles, while specifically paired with a member of the BF2k, was sold separately, without any driver or pilot. I guess this was to spark the collector in the little kid - You bought the "Snow Vehicle driver", now you totally need to buy the snow vehicle as well.

Personally, I think Battle Force 2000 would have been remembered more fondly, had they been sold along with their vehicles. Because they came with few equipments (1-2 accessories each), they don't have the most prominent specialties, and it was hard for kids to grasp the deal of a "special research and testing unit". Another major flaw was that the vehicles, while it was possible to dismantle them, like you see in the picture above, the parts didn't lock together. This would have made them a lot more attractive.

The result was that Battle Force 2000 just didn't click with the kids of the late 80s. Which is probably why Marvel, Hasbro, Larry Hama, or who ever was responsible, saw it fit to kill off the team sometime around #110 or something. The entire team got blown up, and only Dodger survived. A really tragic story line, but very fitting for this - let's be honest - catastrophe of a team. Their best moment was getting arrested for shooting Zanzibar's air skiff out of the air, forcing it to crash into a police car. 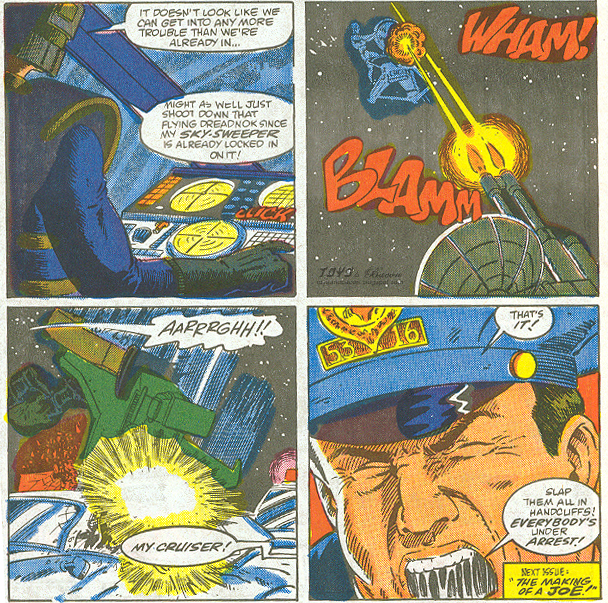 I get what Hasbro was going for with Battle Force 2000. It was taking the quasi-futuristic, sci-fi influence to another level. But in the mix of 1987's incredibly strong line up of relatively realistic figures, they seem hopefully out of place - or just not nearly futuristic enough.
I really love these figures though. I had four of them as a kid, and found them to be simple, yet cool looking. Both Maverick and Avalanche were favorites of mine, and now that I have the entire team, it's even more obvious to me that I like these toys.
So much that I played a bit with them...
Enjoy your weekend, people!
Posted by Jon at 5:14 AM

I have always been a fan of BF2000. I really liked their introduction in the comics by Larry Hama. Their subsequent appearances were well done up to the point of their unfortunate demise - except Dodger, of course.
I always thought that the toys appeared to be a rush job by Hasbro. Too bad. Long live Battle Force 2000!