There's a chance this could turn into a Figure Friday styled article, but if you're reading this, you don't mind.
Soundwave - quite possibly the only Transformers character everyone likes. There's something universal about him, and there's something archetypal "Transformers" about him. I'll explain what I mean inside, but what I can say is that when Takara now releases their Masterpiece version of Soundwave, it's about time. Because more than any toy, Soundwave really did work as a "robot in disguise". 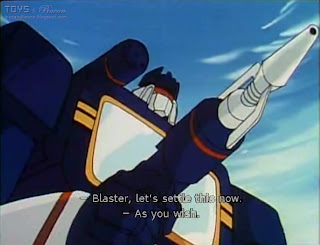 Step on in for more on Soundwave! 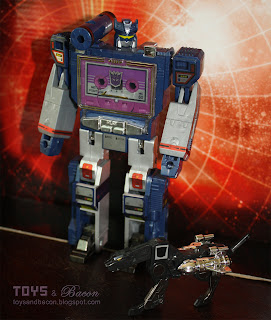 I own the Sand Diego Comic Con Soundwave from 2009. It's more than enough for me, as more of a casual collector of Transformers. It's the Generation 1 mold (as far as I know), and it's unplayed with, just as I like them.
I'm sure the purists would want it to be the original 80s G1, or even the pre-transformers one. As I have talked about before, when it comes to the robots, I'm not that concerned over what version I have, as long as it's a cool toy, and I like it. And now, as we have seen the upcoming MP version, it's obvious that I'll get one more Soundwave in my collection, and I cannot wait to display them next to each other.

Soundwave is the kind of toy I really enjoy having on my shelf, for many reasons. First of all, it's a cool looking toy, but almost just as important is the fact that he's supposed to be a cassette player. I grew up with cassette tapes, as well as Transformers, so obviously Soundwave brings me twice the nostalgia. Then there's the fact that Soundwave is a cool character. In fact, he's probably one of the most beloved characters in the entire Transformers universe. Voice your opinion if you disagree - or agree for that matter.

I picked up the SDCC version because he came with 4 decks - Lazerbeak, Buzzsaw, Ravage and Rat Bat. All for $50, it was an absolute bargain. 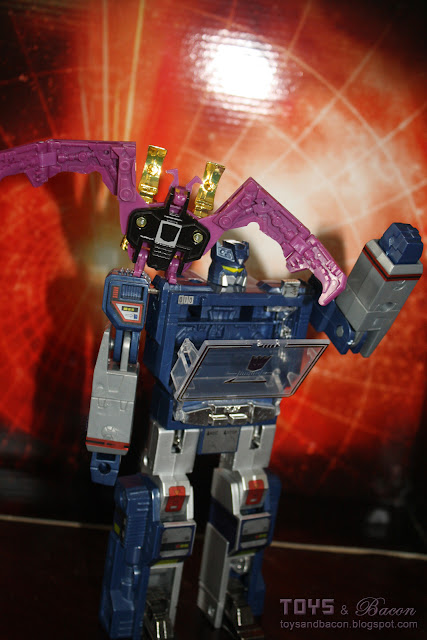 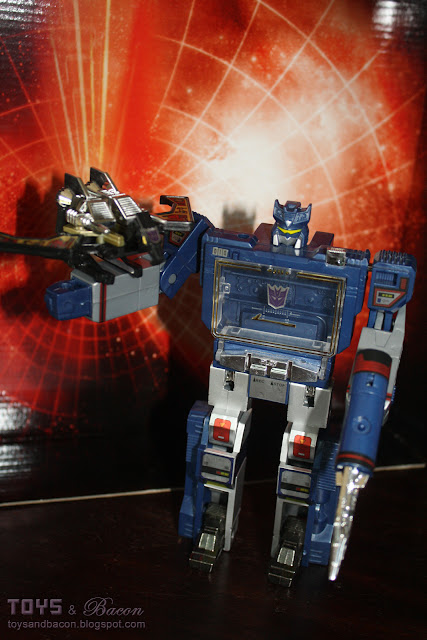 Now, I can't really tell you if this is the exact original mold, as it has been retooled and reissued many times over the years. There may even be differences between the original Japanese and US versions. I know that some versions came with a different deck tray, and as you can see the SDCC one has different from the new Encore reissue Soundblaster.

But I'm talking ahead of myself here.
Soundwave is the communications officer of the Decepticons. Even more so, he's one of the few characters to have the same role in all media. Where Starscream was ambitious and greedy in the comic, he came forth as whiny and pathetic in the cartoon. The cartoon shows Shockwave as humble, informed and loyal. The comic shows Shockwave as vicious, calculating and down right scary.
Soundwave, on the other hand, has more or less the same characteristics in both comic and cartoon. He's a spy, he commands the various tapes, and he deals with communication between his leader and other Decepticons.

Where his Autobot counterpart, Blaster is as close to a protagonist you get, the comics show Soundwave as more of a supporting character. He fills his role as a spy, and more often as a communications officer. He rarely gets his hands dirty, apart from a few moments in the early comics. Even when Starscream goes on a rampage, Soundwave avoids being among the destroyed robots. 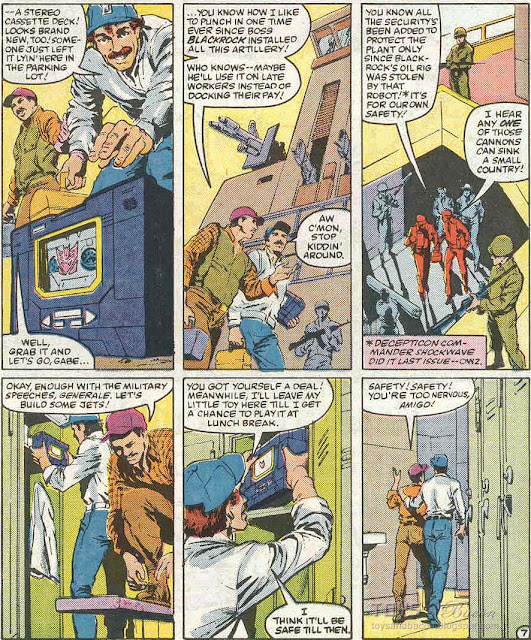 The absolutely brilliant issue 7 of the Marvel comics, shows Soundwave infiltrating an advanced mechanics plant, and ultimately destroying it. It's where we first get to see what he's capable of. It's also a testament to how lethal the giant robots can be. 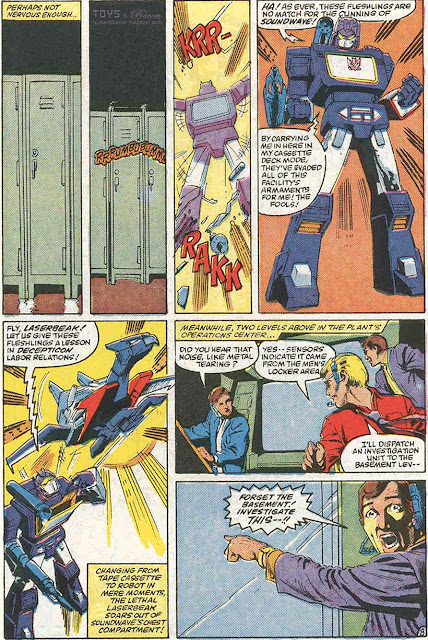 And that's weird, because in his disguise, Soundwave isn't that big. Sure, many Transformers do this kind of thing: All the cassettes, Blaster, Insecticons, even Megatron. They increase their size dramatically in the transition from alternate mode to robot mode. Some robots even go the other way, like Astrotrain and probably all the jets - as they are smaller in robot mode than in disguise. 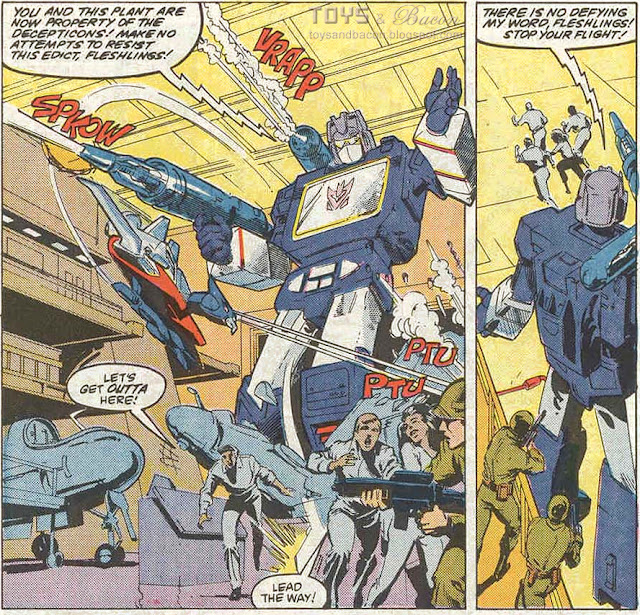 It would be interesting to see the math behind this transformation. How dense and heavy is that cassette player really? Or even more silly, how light is Soundwave in robot mode? No wonder Gears could knock him out with a single kidney punch! 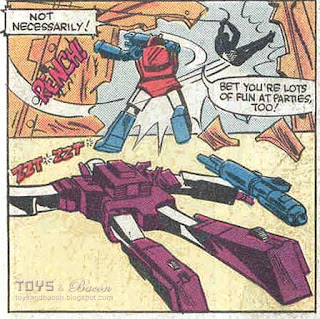 I apologize to die-hard Soundwave fans for showing this.

Anyway. The appeal of Soundwave is very obvious. He's cool looking, he had an alternate mode that was almost in scale with the real deal, and he was awesome in the cartoon - where he's mostly remembered for having a quasi-computerized voice. It has to be heard to be appreciated, so do a youtube search for G1 Soundwave.
Soundwave was featured in several of the episodes, and when the US cartoon ended, the he continued to be featured in the Japanese cartoon. All though in a slightly different style. 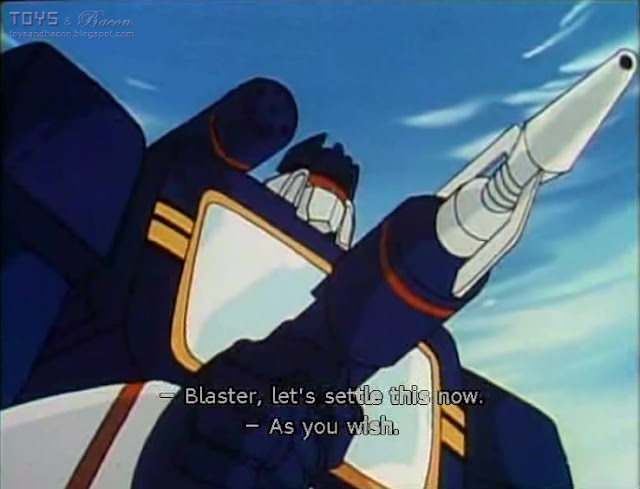 In the second episode of the Transformers Headmasters cartoon - which is the season that would follow the last from the US cartoon - we see Blaster (Broadcast) and Soundwave in a monumental battle, ultimately destroying each other. It's brutal and awesome. 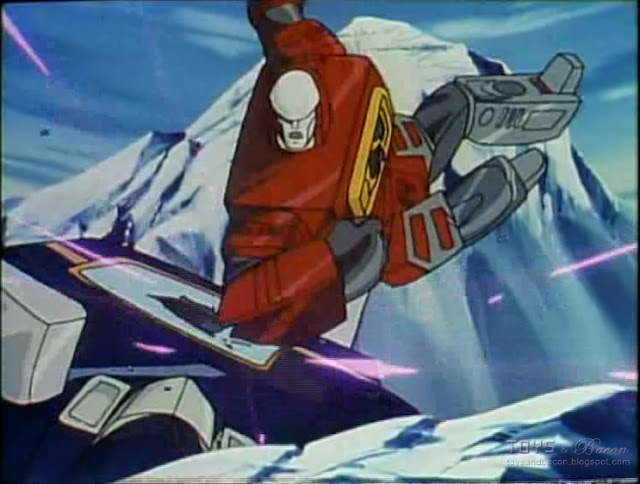 But that's not the end of Soundwave, as he's rebuilt into Soundblaster. Now colored in bad ass black, he continues to work as the communication officer for the Decepticons. Blaster is rebuilt into Twincast, and gets a slightly more silly paint - blue and yellow. No offense to my Swedish readers, but you know I'm right. 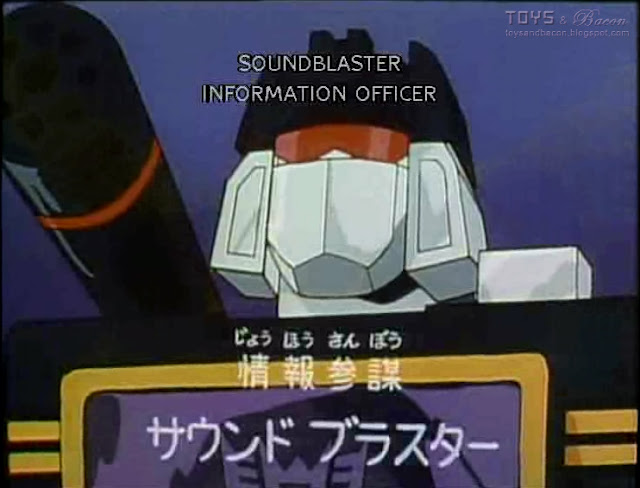 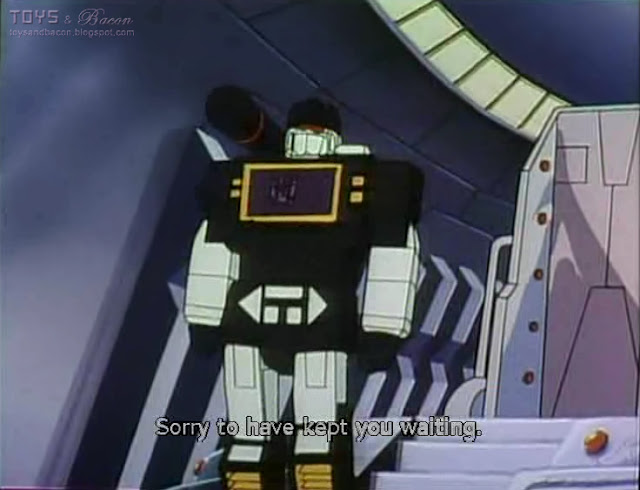 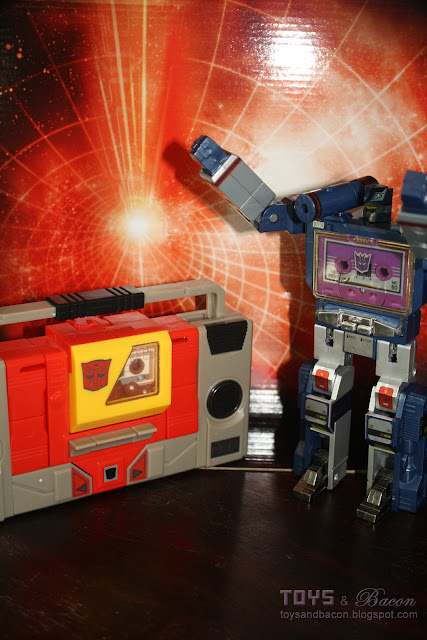 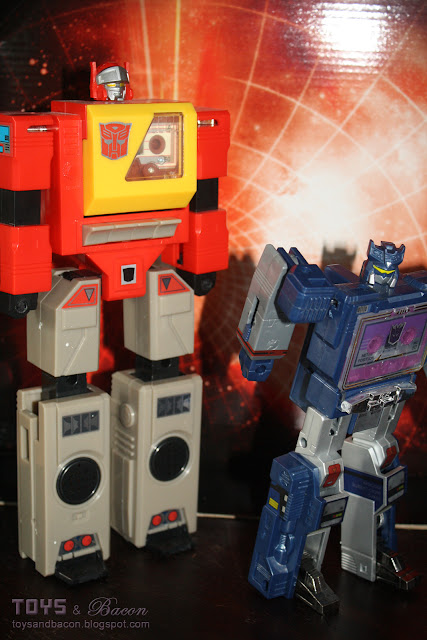 Was there any point in this article? Not really, just a cool toy, cool robot.  And now we can start anticipating the Masterpiece version. Enjoy!
Posted by Jon at 9:14 AM