For all my Lego articles, I haven't really made any proper reviews. Well, that's not entirely true. But if we're talking about sets with a certain size, I have yet to do a review where I talk about the build, the parts, the design, playability and display quality. I'm not sure this will be such a review either, and honestly if you want that kind, do a search over at eurobricks.com. But I'll try anyway. 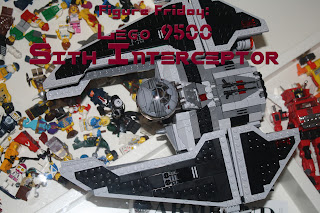 Read on for my thoughts on the Lego Star Wars 9500 Sith Fury-class Interceptor.

According to social norms, I guess we should be out partying on a Saturday night. Both of us thought it much more fun to assemble a Lego set. Going through my unbuilt sets, I was a bit surprised. It was mostly Star Wars sets, so that's where we started. 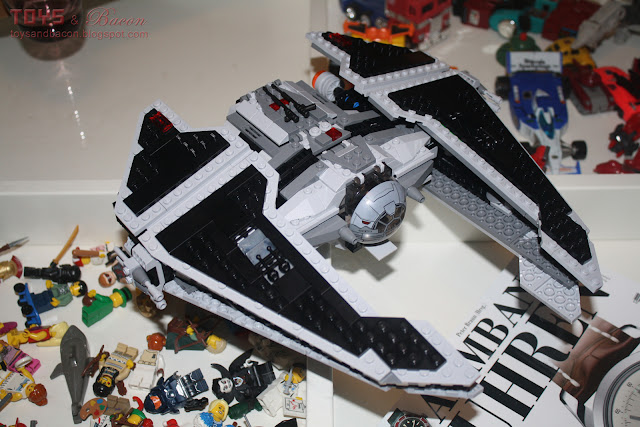 This is the 9500 Sith Fury-class Interceptor from Star Wars: The Old Republic.
Neither of us has played The Old Republic, the new MMORPG from Bioware. The game is set in the Star Wars universe, but something like 3000 years before the battle of Endor. 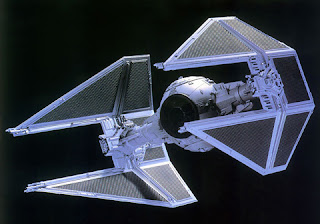 I've read a lot of the Tales of the Jedi comics, and I absolutely love the idea of exploring the ancient history of the Star Wars universe. That being said, I always found it strange that in thousands of years, the technology hasn't progressed a single bit. Based on what I've seen from SW:TOR, the ships look basically the same as they do in the movies. The subject this Friday is a good example.

This is the Tie Interceptor from Return of the Jedi. Remarkably similar to our 3000 years older Sith Interceptor.
It's similar to the point where you have to think one, or both of two things have happened:
1 - A massive extinction event happened, and the sentient beings in the galaxy had to start all over again. Luckily, they went down more or less the same technological path as their predecessors thousands of years ago.
2 - The Sith are nostalgic. 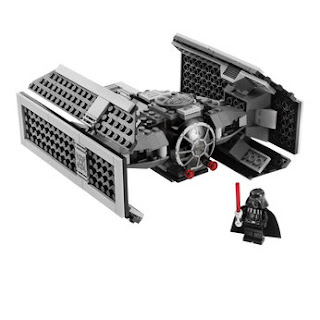 Or maybe a year in the Star Wars universe is really short, like a tenth of ours? I mean, Yoda is 900 years old. But Luke is never really surprised by that fact.

I'm glad Lego are making sets from the expanded Star Wars universe, as it's almost as rich in characters and vehicles as the movies. The ship from the Force Unleashed games have been made, so how about making Kyle Katarn's ship from the Dark Forces games?

General
Like all licensed sets, this is more expensive than Lego's own themes. And even more so since this is Star Wars. In fact, I'm surprised over the price for this set. It was a gift, so I never paid for it. It's $90 / £80 / €100 / 1100kr all depending on where you're from.
That is expensive. But then again, the bigger Star Wasr sets have better price per part, and the Sith Interceptor is no exception. You get something like 750 parts, most of them are very relevant to someone who makes their own original creations. 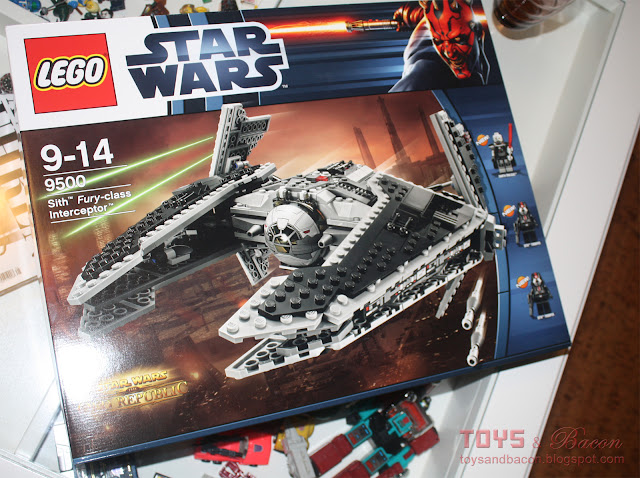 The packaging is gorgeous. A massive image of the Sith Interceptor soaring over a dark city. On the back, we can see different details of the Interceptor, along with an image of several Sith ships chasing a  Republic/Rebel ship ("not included"). Clearly, we're getting three minifigures, where two of them are identical. And as with all the current SW sets, Darth Maul from The Phantom Menace grins menacingly opposite the Lego-logo.

The 9500 has two instructional booklets, both focusing on different parts of the ship, making this a nice set to build for two persons. 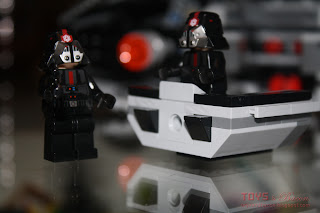 Three minifigures is ok I guess, but a set of this size could have had more. At the same time I do like to fit all the minifigures in the vehicle, which would have been hard with more. As it turned out, there was barely enough room for this Sith trio. Two nameless troopers and an impressive looking lead villain, Darth Malagus. He's awesome. I like his cape in particular - not only because I love capes, but the way he's wearing it. It's hanging from a loosely attached neck collar, instead of being placed under his head. Nicely done, Lego. 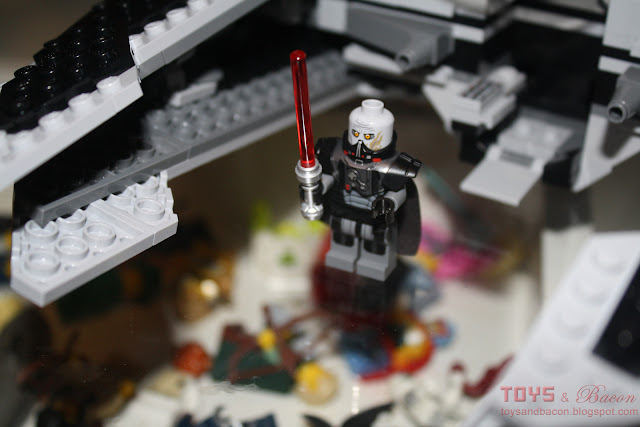 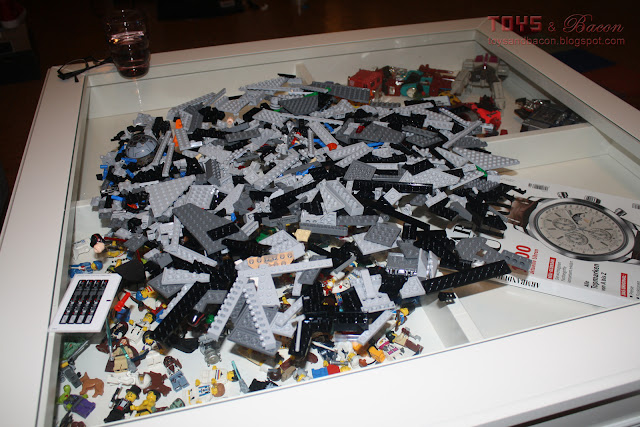 Other than that, there wasn't any real surprises with the parts. Mostly standard, mostly plates and long bricks. A couple of stickers for the stud-less bricks. Bricks of interest was a 4x4 Technic brick that was new to me, a strange Technic part in rubber. And two harpoons.

This being Star Wars, and more specifically Sith/darkside/bad guys, we shouldn't expect a lot of colors, and we're presented with a gray scale set. It's basically gray and black.
I'm ok with this. Girlfriend wasn't. She wants more color, and I can understand that.
A very selected few translucent red bricks break up the monochromy.
I like that this ship is mostly black with some grey, where as ships like the Star Destroyers are exclusively grey. It makes it a bit more interesting, and just the right amount of color variation for my part. 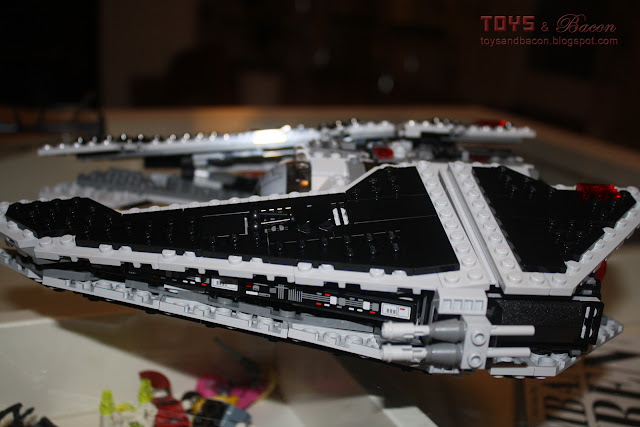 Build
One booklet focused on the body and the left wing, while the other described how to build the right wing. It wasn't any challenge, other than the occasional hopeless search for that missing piece. To make it a bit more interesting, I like to pour all the bags of parts into one big pile. Unless you're in a hurry to build the set, this is the proper way. It feels so much more satisfying to have a giant pile of Lego than to open the bags into separate, smaller piles.

Not a difficult build, but amusing. It would probably have felt a bit repetitive if I did it alone, as the wings took a considerable amount of time, and was basically mirrored versions of each other. Doing one wing each helped out. 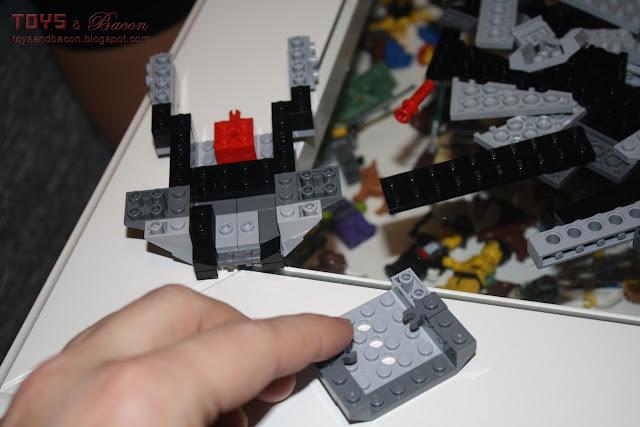 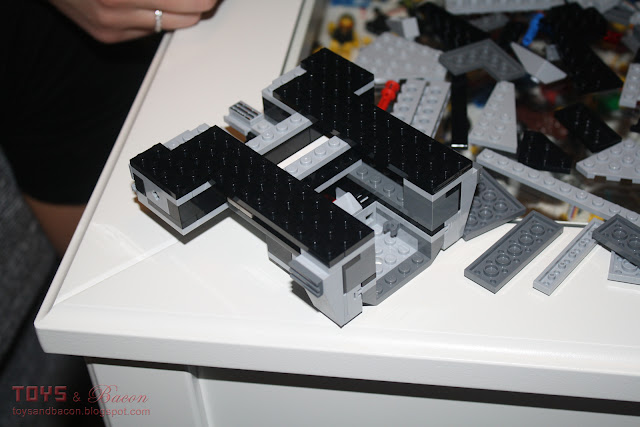 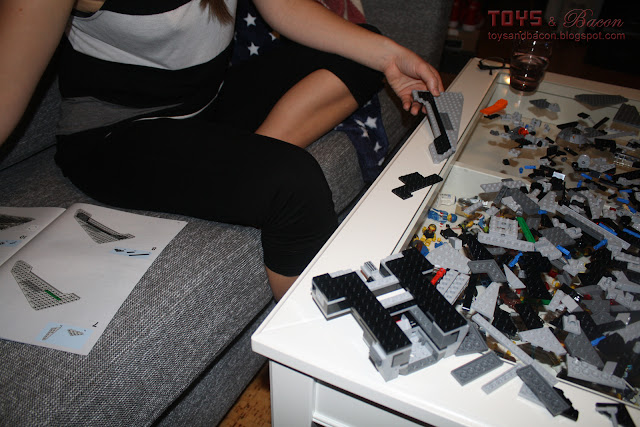 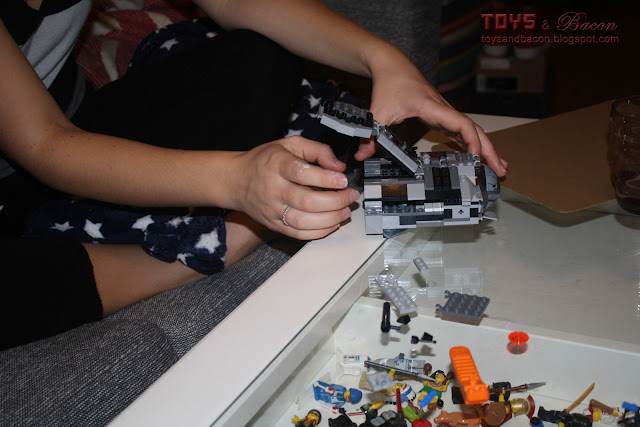 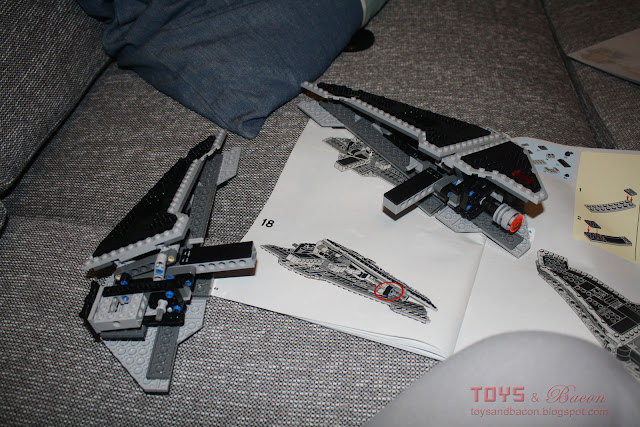 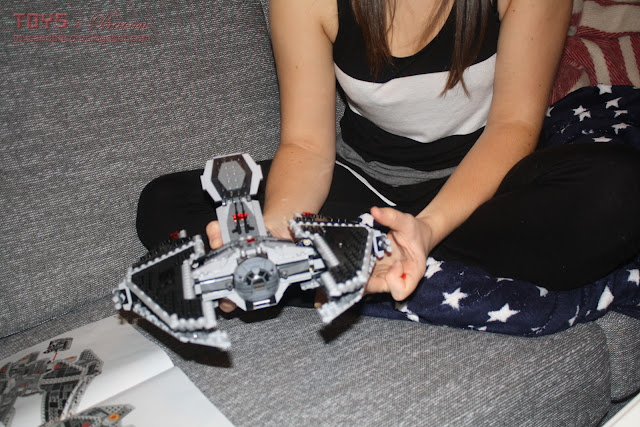 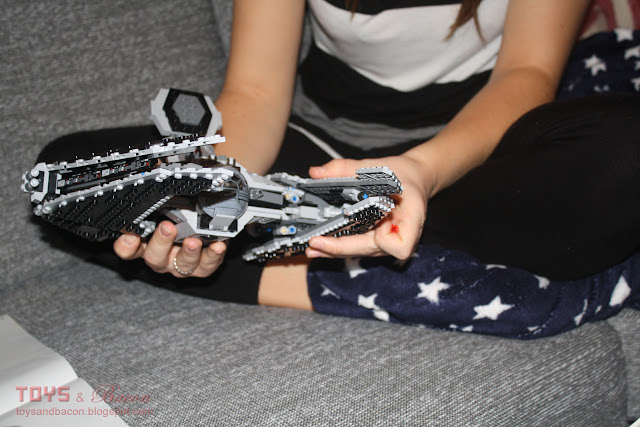 Playability
The 9500 has a couple of play features. First of all, the flaps on the wings. Four flaps can be pulled out a bit. I certainly don't mind this, it's something we're familiar with from other SW sets too, like the X-Wing. But, the ship, while sturdy and heavy in general, is a bit more grafile due to this play feature. More importantly, it's  easy to get the panels misaligned, making the wings slightly uneven.
The ship also has your standard flick-missiles, which are always fun. The booklet informs you not to shoot at any person. But who doesn't?
Finally, the cockpit opens for Darth Malagus, and the back hatch opens where the two nameless troopers sit intimately in a tiny pod. 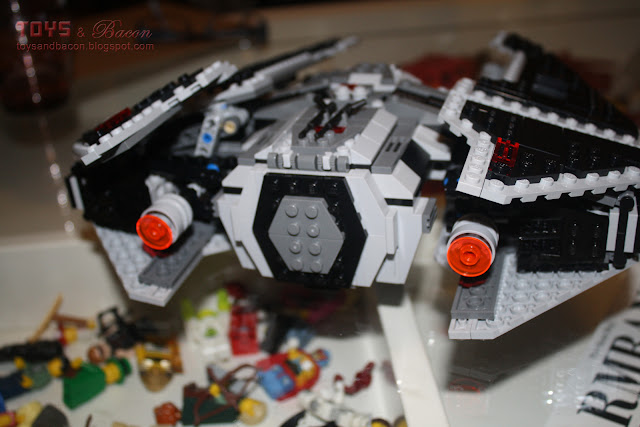 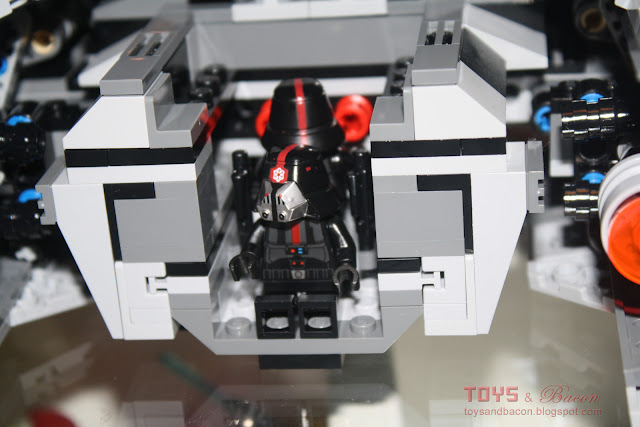 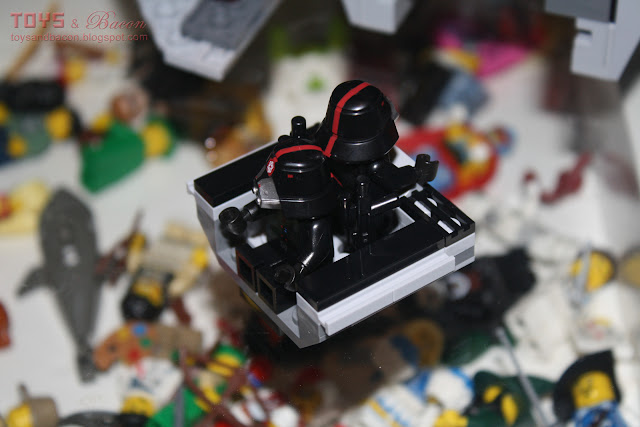 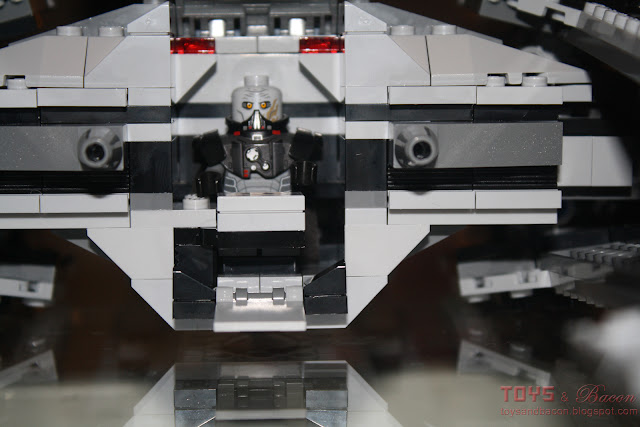 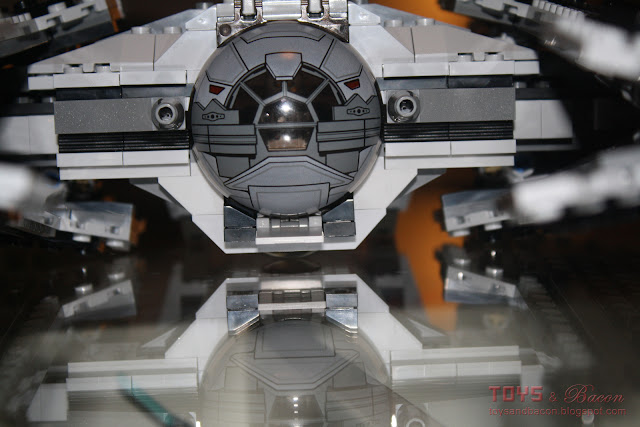 This is a modest, almost mundane amount of play features, and honestly, I'd wanted a bit more. But the ship feels fairly solid. It's heavy and easy to hold. You can fly around in your living room with it, and act out scenes from uh.. the MMORPG.

Display value
The Sith Interceptor looks fantastic. It has a shape that just makes for a good display. It's compact, elegant and cool. This is a set that looks great inside a glass cabinet. Sadly, I couldn't fit it inside my coffee table. I'll make room for it somewhere.

All things considered, I found this set to be awesome. Not super interesting to build, but not boring either. It's big strength is that it's looking absolutely bad ass when finished. 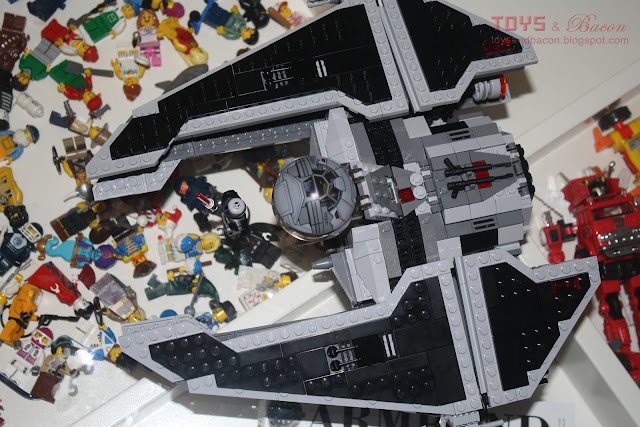 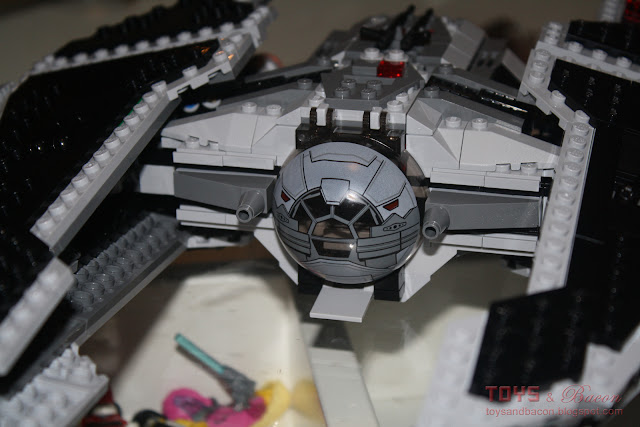 Enjoy your weekend, people! Open, and assemble that set you have lying around unbuilt!
Posted by Jon at 10:00 AM