Masters of the Universe Artwork

Well, I caved - and pre-ordered Castle Grayskull. Extremely expensive, but hopefully worth it. It might not even get made at all.

Riding the high of opting to use insane amounts of money on a single toy, I took out my Classics figures. I still regret deeply that I as a foolish teenager sold my vintage collection of Masters of the Universe toys, but the Classics line gives me that nostalgic feeling - to a certain extent. And to be brutally honest, the vintage toys don't really hold the standards of today. The character designs are cheesy, but memorable. But the toys themselves were.. Well, let's just say that the guys over in Pawtucket, Rhode Island made far superior toys in the early 80s.

The old comics and cartoons are easily available today, and I find myself enjoying them a bit too much. They are awful, specially the cartoon. But I still sat through a couple of episodes without falling a sleep, or being distracted with something else. 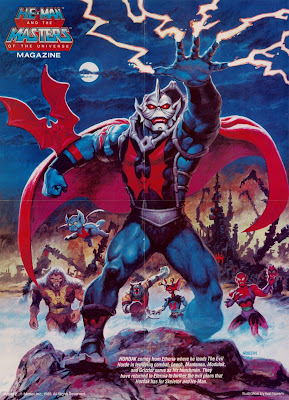 It's not like it used to be in the 80s though, where we would rent He-Man on VHS and watch the tape (with four episodes) over and over the entire weekend.

So, the toys may be outdated and the comics and cartoons may cheesy. But there is one part of Masters of the Universe that absolutely holds up today:

Now, most of the pieces are easily available on the net today, so I'll not share them all. But I can say that every vehicle and playset in the line came with absolutely gorgeous art. The promotional posters and images were also nicely done. Here are two posters that are favorites of mine. They both came along with the US released comic magazine, and feature the heroic Roboto and the evil Hordak.

The Hordak piece is absolutely fantastic. It wasn't really clear from the She-Ra cartoon (where he was the main villain), that Hordak was a sorcerer. But this poster definitely shows that aspect of him. Also notice how cool Grizzlor looks in the back there. Will we ever see Modulok and Mantenna in the MOTUC line? Maybe?
The Roboto poster is equally cool, and reminds me a bit about Star Wars, with Tie-fighters coming in for an attack. Robot didn't really get a lot of attention when he got a Classics version. I mean, most people liked him, but there wasn't any big fuzz about it, like with some other releases. Fisto, Trap Jaw and Ram Man comes to mind.  I guess people don't like translucent plastic as much as me. 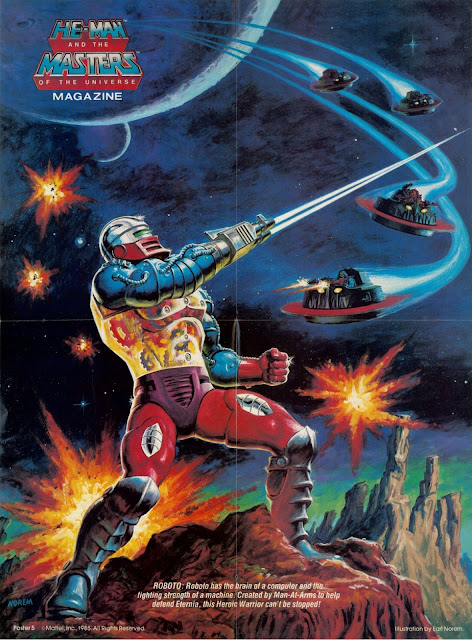 Funny that the artist is Norem, who also did a LOT of Conan covers. Guess the crossover is natural when you think about it, but it still made me smile.

I wasn't aware that Earl Norem made Conan covers as well, but it makes perfectly sense. Cool info, Anon.