Toy guns have grown a bit since the 80s

An acquaintance shared this picture on facebook the other day. He had been to a toy store and was baffled over the size of toy guns - which is actually surprising. Usually you're surprised over the fact that toys seem generally a lot smaller today, which is obvious. I've told the story about how the box to my Phantom X-19 seemed to tower me completely, when it honestly isn't that big in reality. It's all about perception of course. As a tiny kid, naturally you'll find a 50cm box big. And as an adult, it will go the other way. 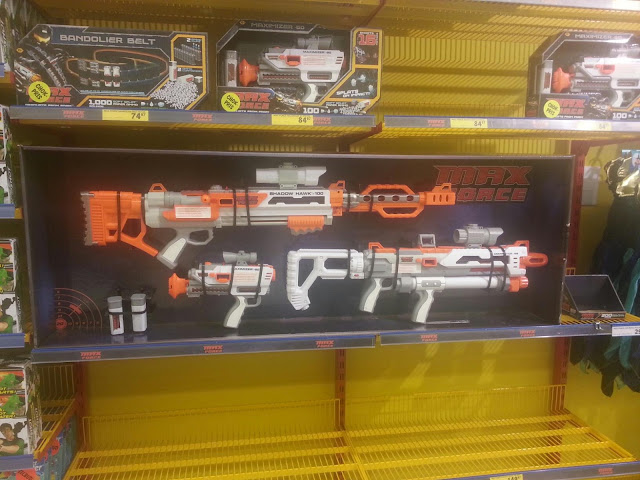 But in this case, with the toy guns are in fact bigger today than they were when we were kids.

Awfully cool, I'd want that set if I was a kid. And I'd buy it for my kids if I had any.
Toy guns make kids violent you say? Needlessly protective parents can cause the same damage. Repressed emotions are scary and dangerous. I grew up with an arsenal of plastic guns, and I'd argue that I turned out ok. Most of us 80s/90s kids did, despite toy guns, army figures and violent video games.
Posted by Jon at 3:17 AM

They have some neat foam dart guns.

There's not only multi-barrel shooters, there are clips and cartridges, for more rapid-fire fun.

One of the more interesting foam dart shooters has to be the one with the ejecting casing one with the special two part dart.