Nothing out of the ordinary really, and certainly something most toy collectors spotted right away, as it was somewhat of a plot element in the episode. Never the less, it's always fun to see toys you know, and in this case, toys you own on a TV-show you follow. 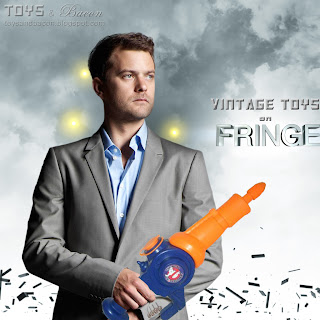 Read on for more

Fringe is a nifty show. It's science fiction, it has some relatively interesting characters, decent special effects, and a plot that's comprehensive yet intriguing. It's sort of a mix between Bones and X-Files, if that's an indication. Obviously, not nearly as good as the best episodes of X-Files, but Fringe - now in it's fourth season (and soon to be canceled like any other good Fox show) is definitely worth  watching if you're fan of sci-fi, superheroes and supernatural crime shows. It moved a bit slow the first season, but gained some pace, developed the main characters better, and is fully able to entertain me at least. Not that that's a difficult task. 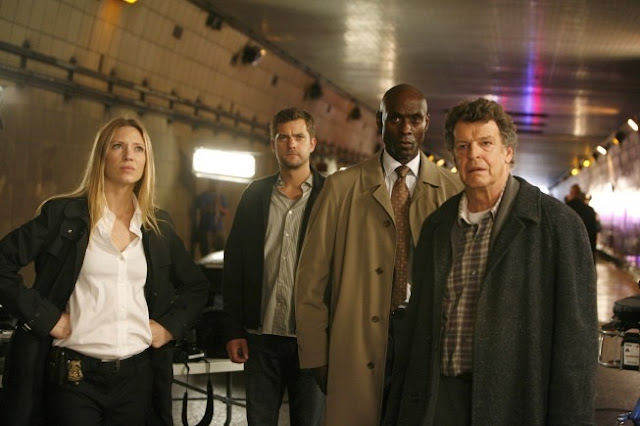 The guy from Dawsons Creek...
Here are the main characters in the show gathered.
The guy on the right was a real douchebag in Lord of the Rings, but has an excellent role in Fringe - the mad scientist Walter Bishop. He's a character you just have to like, he's good natured but conflicted, skilled but quirky. And most importantly, he's well played by the actor. 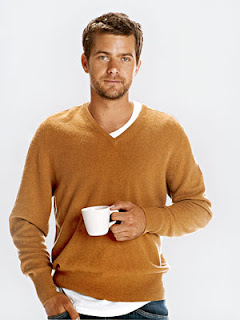 The woman to the left is the main protagonist, FBI Agent Olivia Dunham. She's a poorly developed character, and not all that well played, but she has long, blond hair, and is fairly fit, so there's that.

The young man in the back was in Dawsons Creek, but we shouldn't hold that against him. He's decent in the role here as Peter Bishop, a man of two worlds. 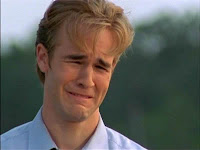 Unwillingly, I ended up watching quite a few episodes of Dawsons Creek, all though I never really understood the plot, what the characters were about, or the fascination girls had towards the show. But this is not about Dawsons Creek...

Inspiration or stealing?
It's worth mentioning that Fringe - all though the creator J.J. Abrams will deny it - has used a comic made a decade ago as a blueprint, which is probably why the show has a certain quality.

The main plot in Fringe is that the universe where our heroes live is on a collision course with an alternate universe. They constantly fear that agents from the other universe will cross over to defend their existence.
There are three main characters. 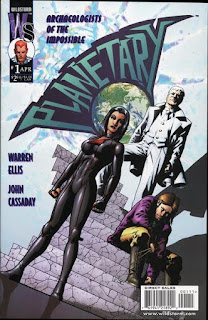 The elderly main character has had his memory wiped - but is slowly gaining it back. Back in the day, he was in the midst of exploring the weird and unknown of the world. The young woman is the muscles, she's kicking all kinds of ass, and she has a close relation to the old guy on her team from when she was young, all though she cannot remember it. The final person, the young, tech-savvy joker who has a superpower that will allow him to power and communicate with advanced, ancient machinery. Also this guy has a close relation to the old guy.
Together, they solve mysteries...

If you have ever read Planetary - and you damn well should have, because it's the best comic made - you will probably already known about the similarities of Fringe. And for you others, if you want to know the plot in Planetary, just read the above paragraph.

The whole "alternate universe" thing isn't new, but any means. It's pretty basic sci-fi. But the plot of Fringe and the first issue of Planetary are awfully similar. 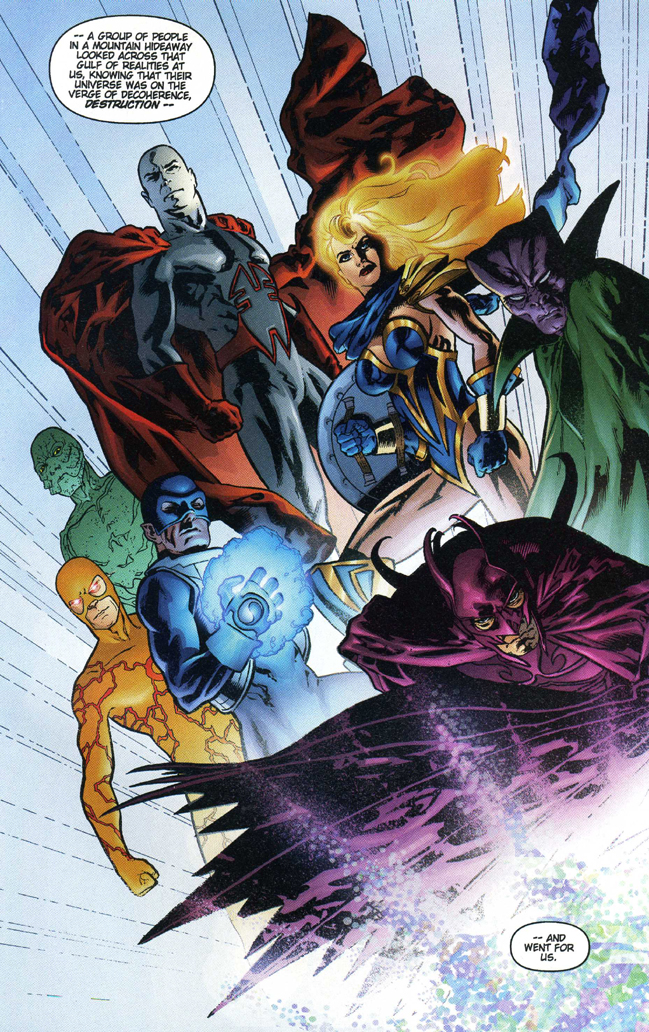 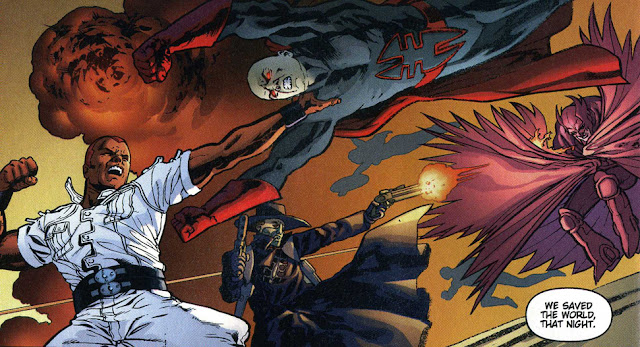 But this was not about Planetary...

The eerie toy store
Now back to Fringe, and the episode in question. It's episode 15 in the third season. It's called "Subject 13", and the entire episode, set in 1985, is a flashback where all the main characters interact.
Peter Bishop, here aged something like 8, is feeling down. He's sad because he was kidnapped from his real parents over in the alternate universe. His alternate mother is trying to cheer him up and brings him to the toy store. He has been a good kid, not questioning reality too much the last day and is allowed to pick anything from the toy store. And this is where it gets really weird!
The toy store feels completely out of place, and instantly, we spot several items that just doesn't add up. All the toys in the store look randomly placed next to each other. Just look. A board game right below Ghostbusters toys makes little sense. And the way the board games are stacked... A toy store would use that space in a more efficient way. 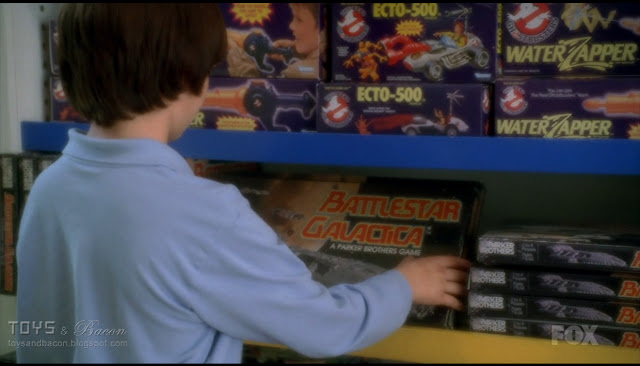 Then there's the matter of Ghostbusters in this setting at all... Ghostbusters came out in 1984, but these toys are based on the cartoon called "The Real Ghostbusters", which didn't air until 1986, and as you remember, this episode of Fringe is set in 1985.

This is actually a minor issue, most people don't really know facts like this, and even I as a toy geek can look past that without being bothered too much.

Moments later, the young Peter Bishop is watching another kid play a video game - Joust. I know little about video games, but a quick search shows it's from 1982. This is still not a big deal, because we know how popular games can be popular for a while. Obviously, in the 80s, technology moved at a crazy rate, and the stuff that was cool in 82 must have looked like it was from the stone age in 85. Kids would maybe be satisfied playing a three year old game at home, but not in a toy store.

The worst thing about this scene is still that everything looks so random, almost like it's the ideal of a toy store, and not an actual toy store. Games next to water pistols, wooden toys next to action figures, toys for babies placed next to toys for teenagers. There's 3-4 examples of every product, and there are far too many different products. There's no cohesion. The show is definitely science fiction, but this is too unrealistic. This clearly isn't a real toy store. And it all becomes obvious in the next shot... 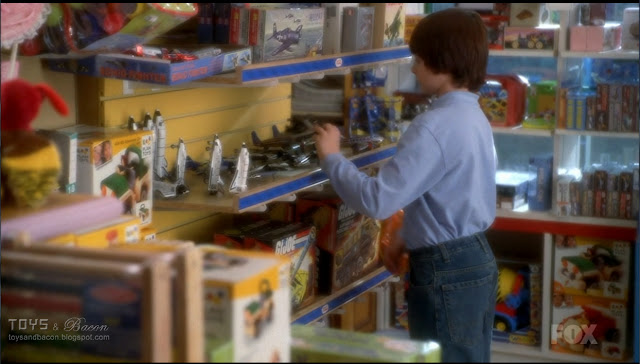 Peter picks out the toy he wants, a transport plane in die-cast metal. Not the space shuttle, not the fighter plane, not the god damn G.I. Joe vehicles right below!
That there is the A.P.C. Armored Personell Carrier (from 1983), and the self propelled cannon Slugger (from 1984). The placement of these two vehicles is weird, the fact that they have only these two vehicles x2, and no other Joes is weird. Fair enough, it's a show about weird. But Peter not picking a Joe vehicle?? Sorry, that's too far out there.

Here's a picture of the Slugger in it's right element. 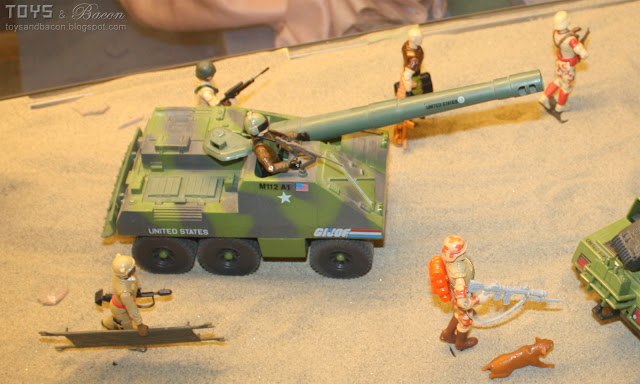 Obviously, I forgive the Fringe staffers that designed the toy store, simply for the fact that they included Joes, and both these vehicles are truly classics. And they actually got the time frame correct, unlike with the Ghostbusters toys. And even though the design of the toy store weirded me out, it delights me to see vintage toys on a modern show.
Posted by Jon at 12:32 PM