Why I haven't made a top 10 list yet is beyond me. Ideally, I should have saved this topic for a future return of the Ocean Week, but I'll definitely have something interesting in store when we return to the deep blue. 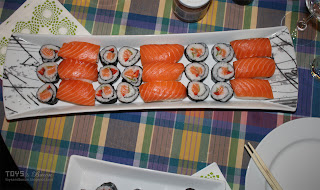 Read on for the top ten difficulties that arrive when you make (and eat) sushi.


Making Sushi is actually a lot easier than you'd think, and if you haven't tried it, I strongly encourage you to do so. At some point I'll write a small guide, and you'll see how simple it is.
You do require some very specific ingredients and it takes a little while to make, but it's a fun process, and you're probably relatively soon making better sushi than most restaurants, for a fraction of the price. I'm not kidding.
But there are a few issues in the process that can be challenging. Some that can be extremely difficult. And even some that are close to impossible.

But before I move on to the list, here's Toys and Bacon's Comprehensive Sushi Dictionary:
Sushi - The awesome combination of raw fish and rice. Traditional food from Japan.
Nori - Edible seaweed used to wrap sushi.
Maki - "Rolled" sushi, with the help of a bamboo mat, a cylinder containing rice, fish, various vegetables is rolled then sliced.
Nigiri - A ball of rice with a piece of fish on top. Often in combination with some wasabi.
Wasabi - A spicy paste made of horseradish and mustard or something.
Shari - The name for the shortgrained rice with the added cocktail of vinegar, sugar and salt.

Got it? Now, obviously, I'm not a sushi chef by any means, and I'm learning new stuff every time I make it. But I have made sushi enough times to be able to recognize areas that are challenging, and this list collects the ten biggest obstacles when you as a happy amateur are making sushi at home.

If you  agree or disagree with the list, if there are other things you'd have added, or if you simply want to correct factual mistakes, just leave a comment below. 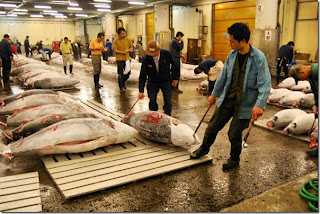 You wouldn't think this was a problem. I live 10 minutes from the coast, in a nation that's built by fishermen. Still, most of the fish we get here are just not fresh enough. Mind you, if preparing the fish in any way, frying it, making soup of it, throwing it on the bbq, it's not that important. But when you're going to eat it raw, you want the absolute freshed fish you can get your hands on. Frozen fish is an option, and this is what you'll get in most sushi restaurants, but I assure you, fresh fish is just infinitely better.

9. Variation of Fish
As you can see, I made out of salmon exclusively. There's also the option of using shrimps, and even crab sticks. This will greatly reduce the price. But would you honestly eat cod, pollock, herring raw? I know, I know.. what's the worst that could happen? It would probably be great, but when you think of sushi, you really want the tuna. Tuna can be hunted down in frozen state, but it's extremely hard and even more expensive. We're talking prices that would render it pointless, if you're even allowed to buy them. When the tuna is caught, it's usually sold at auctions directly to restaurants, and they gladly give billions of yen for the right specimen. You are just making dinner, and unless you're crazy, you'll pass on the tuna. But it gets increasingly tempting to try other fish, just for variation. And why stop at herring? Why stop at fish? Octopus and crustaceans are common, but how about whales? Jellyfish? Ocean-based superheroes? 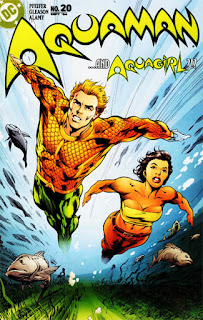 8. Boiling the Rice
In my mind, this is actually not that difficult. But then I hear about Japanese chefs who only after 20 years of study, truly masters the task of boiling rice in a proper fashion. I get it, it should have the right texture, the right temperature, the right taste. But 20 years? I'm not calling myself a master, but after a few tries, I'm able to replicate the results on a consistent basis. Or is there something I'm missing? Probably.

7. Cutting Fish
When you have a piece of salmon, it should be cut a very specific way, I guess for it to be easier to chew. You can't just start slicing up the fish. Again, I assume the best sushi restaurants expect no less than 10 years of cutting fish before you can actually call yourself a sushi chef. And I agree. It's difficult, you need an extremely sharp knife and you need a lot of practice just to be able to get similar sized bits.
Personally, I fail every time, and I suspect the problem is located near the wooden end of my knife.

6. Making it Look Delicate
This is closely related to the two previous points. The texture of the rice will affect how easy it is to work with, and the size/quality of the pieces of fish will determine how it looks. Then there is the matter of decorating the bits, making it presentable. Use my last effort as an example. First of all, I could have had some nori around the nigiri bits, and the slices of salmon should have been smaller. The maki bits are not bad looking, but they could have been round, and they could have been a bit more uniform in size - In fact, they're probably not even resembling proper sushi. I still devoured them, like Galactus would feast on Jupiter after a diet of Oort-cloud-objects. 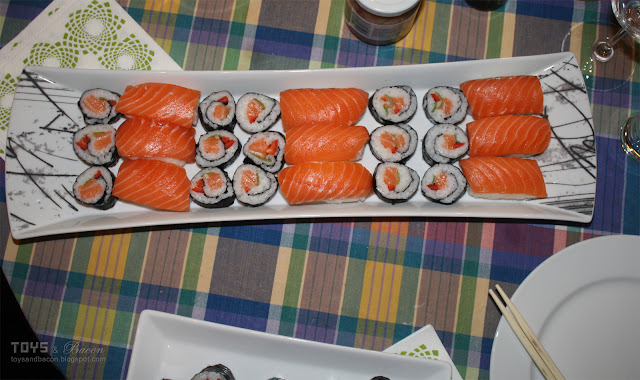 5. Small Enough Bits
Another point that's a bit related to the rice, but even more so your natural instinct to make bigger pieces. I guarantee you, more and smaller pieces are more fun than fewer and bigger pieces. Resist the temptation to make one gigantic piece of sushi.

4. The Nori
Nori is the seaweed wrapping. The trick here is to actually have it moist enough, to prevent it from having that thick rubbery texture, but still maintaining the structural integrity to contain the rice and fish. I usually roll up a cylinder, then just rub it with moist hands.
Sounds dirty, looks even worse, but it makes for a great norimaki. 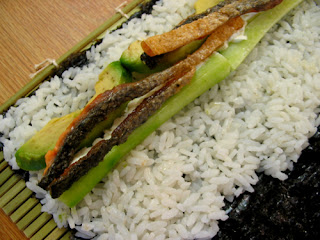 Depending how you look at it, this is probably the hardest part of making sushi. I find my self sticking to the safe home of rice and salmon, with very few additional ingredients. Anything can be put into the norimaki, it's just your imagination that stops you. Carrots, olives, salami, bacon. Anything can be put outside it as well, including bacon. I guess making sushi out of herring or cod would be considered creative. That's something to think about.
But you're likely to break quite the handful of sushi rules. And when we talk about rules... 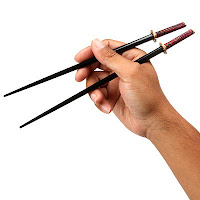 2. Eating It
This goes beyond the mere learning how to use chop sticks. That's a relatively mundane task, even though some people will never learn it.
No, the hardest part about eating sushi are all the unwritten rules, all the traditions. I can imagine, if learning how to make the food takes 30 years, learning to eat it should take at least 10-15. I know very few of these rules myself, and as such, I assume I break even more of them. For instance, you shouldn't dip the rice in the soy. And you should eat the entire piece at once. There are probably a bunch of rules that - if you broke them - you'd be a disgrace to yourself and your family.

1. Making Enough
Seriously... If you have succeeded at making sushi, you will not have made enough. You will eat it all, and want more. If you don't eat it all right away, you will eat most of it, and finish the job as soon as you have room for more.
Solution: Make more.

Hey, nice post (and hello from reddit). One thing I have some slight confusion with is on whether frozen fish is better or fresh fish. I imagine that if you were on the boat and got to kill the little bastard right then and there that would be some damn good sushi, but for the landlubbers I've heard what accounts as "Sushi Grade" is fish that is killed immediately on the boat and chucked into the freezer right away to kill parasites? Link: http://www.sushifaq.com/sushi-sashimi-info/sushi-grade-fish/ Then again given the murky nature of what sushi grade is precisely, perhaps the point is moot.

Hey Brian. Thanks for comment. You are right about frozen fish, sometimes it's a good alternative, other times it's the only alternative. I'd rather use frozen fish of good quality than "fresh" that has been lying in store for a few days.
The one I use regularly for sushi is a vacuum stored right after it's caught and cut. If it's >3 days, it's easily on par with day-fresh fish. If it's 4-7 days, it's eatable, but has lost some taste. If it's past seven days, I'm not touching it.