Figure Friday: Avengers will be Assembled

The first two sets arrived today by mail. It's the smallest of the Marvel Superheroes sets, featuring Captain America on a bike, and Iron Man chasing Loki and Hawkeye. And I'm very excited. In fact, I'm saving these for a special occasion: my summer holiday which starts in two weeks. 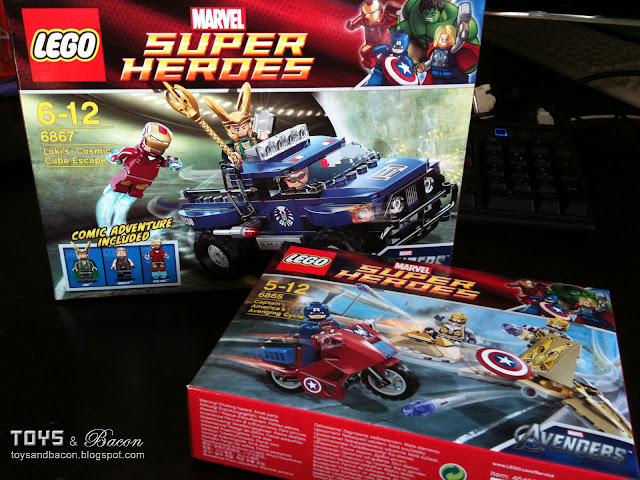 If you saw the latest Avengers movie, you obviously see that these sets are based (if somewhat loosely) on the movie. I'm ok with this. When I first heard about Lego doing Marvel, I was a bit annoyed that they would be based on the movie - because what if the movie sucked? It would have been a minor problem, because it's still Lego after all. But there's a reason I prefer Original Trilogy Lego over Prequel Lego.

You know how it is though, the movie was amazing, definitely better than most Avengers comics ever made (which I talk a bit about here), and almost to the point where I consider the movie to be canon for anything Avengers. And the result today, this last Friday in May, is that I have to restrain myself from opening these boxes. And it's really no point in doing so. I can probably build Lego and do my real work at the same time. But I like to save them for that moment when I have no other distractions.

And distractions I have, which is why this Figure Friday article will be slightly shorter than what you are used to. I will leave you with a few impressions based on the unopened boxes of these Lego Superheroes sets:

• Iron Man wasn't chasing Loki, it was Maria Hill and Nick Fury. Would you be excited for minifigures of the SHIELD directors? I would.

• Loki is featured in three of the five Avengers sets. I don't mind, he looks to be a fantastic figure. Cape, helmet, staff, great detailed print.

• There are two versions of Iron Man, this is the Mk.6 he had in the first half of the movie.

• The Cosmic Cube is a standard, translucent 1x1. I like that. Iron man's repulsors are round, flat 1x1 in translucent blue.

• TLG (The Lego Group) have gone with stickers for the vehicles. AFOLs (Adult fans of Lego) seems to be torn on this matter. I'm in the camp that would prefer printed bricks instead of stickers, but I can see how it's convenient if you plan on using the bricks for something else.

• The two aliens chasing Captain America have different faces, and are actually kinda creepy for minifigures. Well creepy in a cute way of course. They are still minifigures after all.

• Captain America has maroon colors, just like in the movie. But here, with his maroon bike, maroon shield, maroon gloves. It's all very obvious how red it should have been, and how very maroon it actually is.

• And regarding the motorcycle... Doesn't it vaguely look like a scooter? Something that teenagers or old men would drive? Technically, Capt. Steve Rogers could fall into both those categories, so I guess it makes sense. But I'd liked to have seen him on something like this instead: 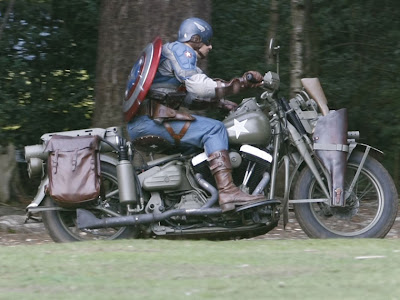 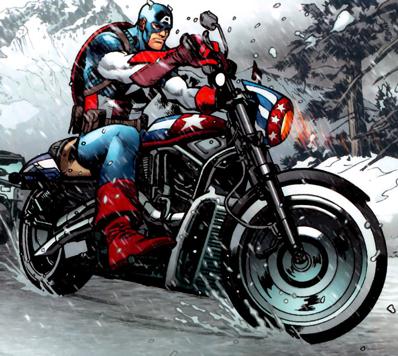 Enjoy your weekend people.
Posted by Jon at 12:40 AM