I showed an example of box art last time I wrote about bootleg robots. 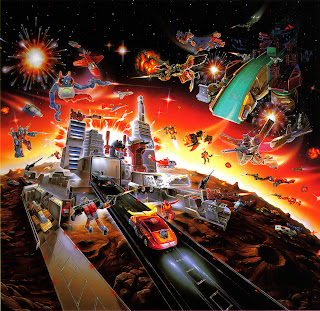 Read on for a lot more!


The box art always fascinated me, and it's something that's rare these days. Today, either you'll get a plastic display where you can see the actual toy, or you'll get a poorly computer generated image. With Transformers, and to an even greater extent G.I. Joe, we had amazing box and card art for every toy. With G.I. Joe, we also had small images on the back showing other figures in the line. Transformers boxes gave composite images, showing many relevant and contemporary robots in epic battle.

This was the first such image, used in all regions in 1984.
As you can see, Optimus Prime resembles his G1 toy more than his cartoon and comic versions. And the artist had no problem drawing several copies of the same character. You can for instance see two Ravages. All of the robots above were part of the first year of Transformers, and you can see notable characters like Starscream in the center shooting at Optimus, Wheeljack coming in slightly behind Starscream. Sunstreaker and Prowl right above Optimus and Bumblebee in the far distance.

This is the 1985 image from US and Europe. New characters were added, most notably the Dinobots, Insecticons and the amazing Jetfire in his toy design (which is a big deal). I have so much to tell you about Jetfire, but I'm saving up for the right moment. You know I love Macross and Transformers alike, and Jetfire is where it all comes together. A fantastic toy, by any standards. Looks cool in all modes, is big, cool colors. Jetfire is up there with RAH B.A.T, the Tomahawk and MOTUC Battlecat. Jetfire is one of the best toys ever made.

Quickly, Japan releases started having unique, and in my opinion cooler art. This is from 1985, and the mighty Devastator plays a significant role in this composite picture. Notice that many of the robots have identical poses to the US/Euro art. The Dinobots for instance, have been drawn in the same posture. What came first? I can't tell.

The big city robots were featured in this piece. Notice the crates in the ground beneath. Scary, but in Japan they weren't afraid of taking the storytelling further than in the US, specially when it came to the cartoon. We got treated to robots being silly, nonviolent, and rather amusing. Nothing dangerous went on, and giant robots battling each other had little consequences for anyone. Japan was different. Kids weren't patronized and treated like people who didn't care if the story was bad. I've mentioned this before, when I told you about the original Macross saga. A more mature and serious story, still intended for kids, but not dumbed down  like many US cartoons. There's an even better example. Heard about a TV show called Space Runaway Ideon? Google it for the full story. For the short story: The giant robot destroys the universe and everyone dies.

Same year, same world, different style. We're on the moon it seems. Triple changers, the movie characters. Very cool art. I like this one.

The big one. It's safe to say that 1987 was a big year for 80s toys. Many of the best G.I. Joe figures, along with the monumental Defiant Space Complex were released in 1987. Some of the best Masters of the Universe characters saw the light of day in 87, and in Transformers, we got the big one. Fortress Maximus. The holy grail to any and all Transformers collector. The rest of the Headmasters aren't bad either.

Powermaster Optimus Prime had a big part in the Japanese cartoon, but was barely interesting in the US/UK comics. It just didn't feel like Optimus. And the toy is awful. It has - I'm not kidding - two points of articulation. He cam move his arms up and down. I always found The Pretenders a bit stupid, but when they are neatly displayed all together, they're actually not bad.

At this point, the Japanese didn't just have their own cartoon. They also had their own robots. Neither of these saw US or Euro releases. Which is sad. The red guy in the middle is Star Saber - an absolutely stunning toy.
One of my friends had Overlord, the big robot in the back. I remember it as one of the coolest toys ever. A toy that today is unnecessarily expensive. But I guess you can say that about any G1 Transformer.
Posted by Jon at 8:16 AM

Good stuff to get the imagination going, and make me want to buy more stuff.