The term "bootleg" is a bit silly, when you use it on toys. Most of you know where it comes from: Illegal items hidden in the boot, like knives and bottles. When I grew up, I knew the term through illegal tapes of concerts. Today, I associate the term with toy replicas.
I've talked about bootleg toys many times, and I suggest you use the "bootleg tag" to read other articles. It should be apparent that I actually like bootleg toys - as long as they are sold as just that: not the real deal, but a copy. The big problem occurs when people are being fooled to believe it's the real deal. My fellow blogger, Heroic Decepticon has stated that even he - a legitimate expert in everything Transformers - fears the counterfeit, bootlegs, copies. It's a minor problem when the bootlegged toys are low profile Gobots valued at $2. But when you're talking about toys worth hundreds, even thousands of Dollars, the problem is a bit more apparent.

Me, I still appreciate the bootlegs. They are fun toys you don't have to be scared of playing with. And as I tend to open my toys, pose them, play with them - and as I take absolutely no pride in my Transformers collection (like I do with my G.I. Joe collection), I really don't mind if my robot is "real" or not... To a certain degree.

Today, I will show one of the coolest items in my robot collection, the Bootleg Transformers G1 Metroplex. Now, consider this part one (of at least three) about Metroplex, because things have changed ever so slightly since I took these pictures. 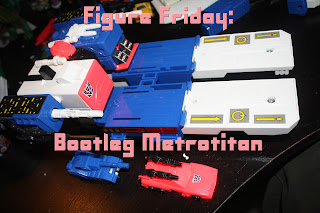 Read on for more about Bootleg Metrotitan / Metroplex 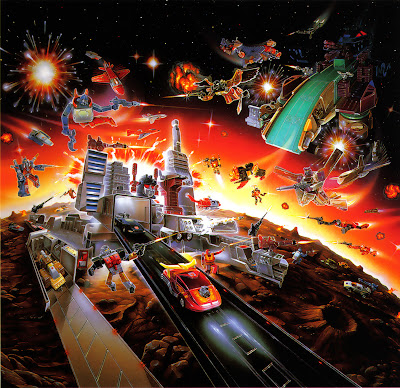 Metroplex was sold in the mid- to late 80s, and is among the Transformers that's better known for its toy version, than the media version. The reason was he was produced in a relatively big quantity, he was seen both in US, Europe and Asia, and he was relatively cheap for its size. He was also heavily featured on the box art of all the robots. One such example to the right here.
This resulted in many kids owning a Metroplex.

Metroplex is one of my favorite transformers for many reasons. He's big, he has tons of play value (launching mechanisms, ramps), he has at least three modes of transformation, and I like the idea of a city turning into a robot. There's just something there that resonates with me. The idea of something so ridiculously massive going to battle with something else of the same size. I like that. 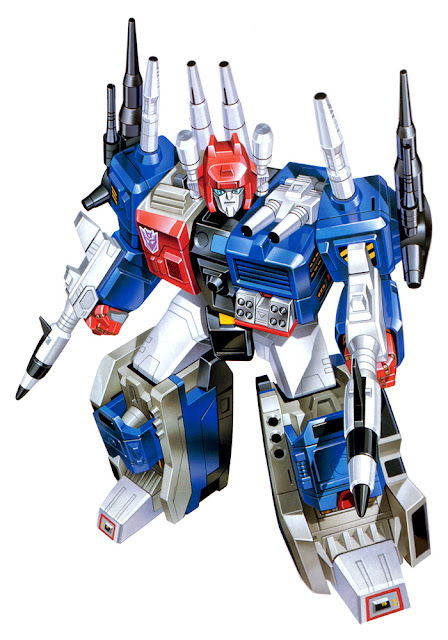 The Metroplex mold was used again in the very early 90s, to create Metrotitan. This was a Decepticon robot, and was featured in the Minibot sub-line. Produced in a much smaller quantity than Metroplex, and mainly seeing release in Europe and Japan, this quickly turned into a rare item. Today, it's quite an expensive toy. Without me having actual numbers in hand, I would assume a complete, loose one in good condition is at the very least $500.

And where there is a rare toy, there are someone making a bootleg of it. 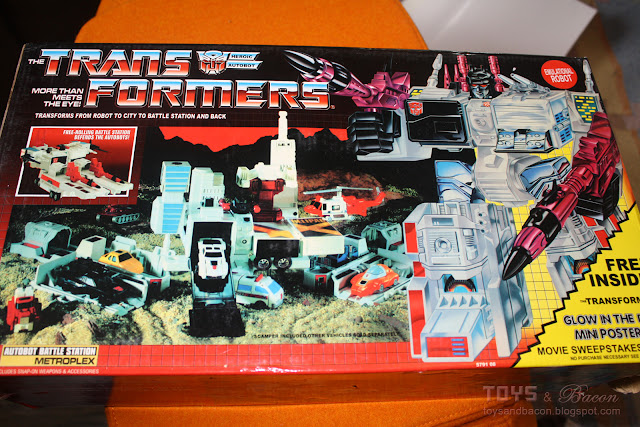 The Bootleg Metrotitan came in a Metroplex box, labeled as Metroplex.
And just to avoid any confusion, the box is slightly different from the actual Metroplex box, thicker cardboard, blurry pictures. I will show a comparison next week, as I have a boxed Metroplex too.
Why is this? I don't know. I would assume the bootleggers didn't have access to the actual Metrotitan box. And I guess that's a good thing. Because it would make it harder for people who wants a real Metrotitan.

I think it's difficuly to take this toy for the real deal, but a replica of the box would complicate things ever so slightly.

The toy just doesn't feel like a real Metroplex / Metrotitan. Nor does it feel like Transformers-quality plastic. It's lighter, just a bit too flimsy, the colors, specially the pink/salmon are duller than on most Transformers. Without actually having seen a Metrotitan up close,  I want to believe it's impossible to be fooled by this toy.
Still, it doesn't feel like poor quality. It just feels different. The joints are clicking nicely and after several transformations, it's still holding up. 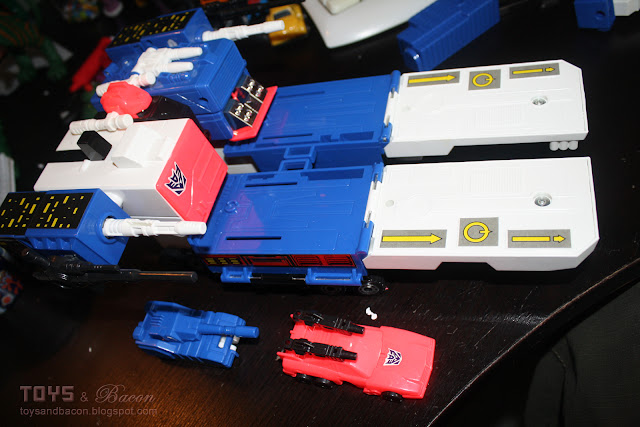 Here he is in car mode. Notice the tank and the small pink car. I'm not sure those came with the real Metrotitan, at least not the car. But I'm sure the answer to this can be found on the various Transformers wikis.
Next up he's in robot mode. Notice the stickers, probably the weakest part of this set. Dark, uneven, low resolution.
He still looks impressive. 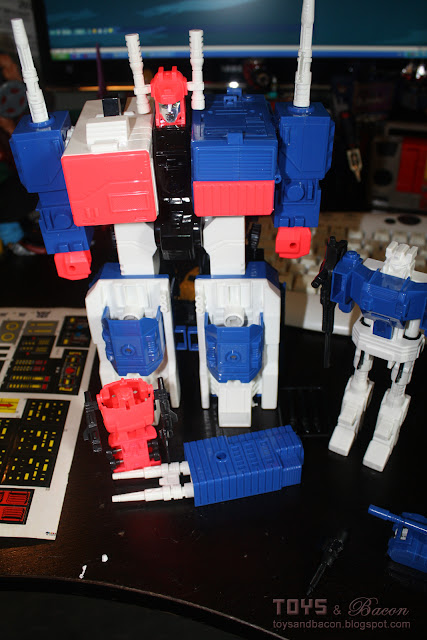 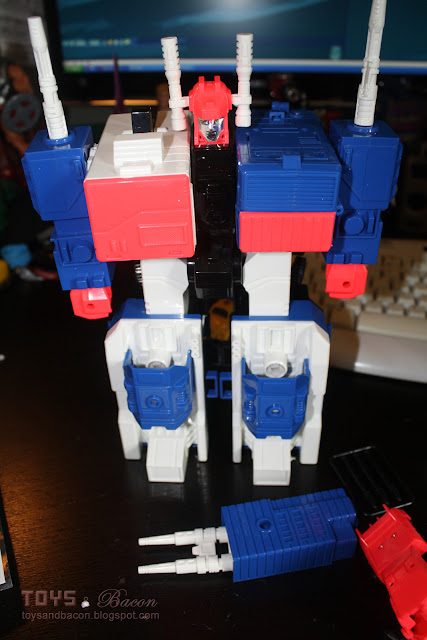 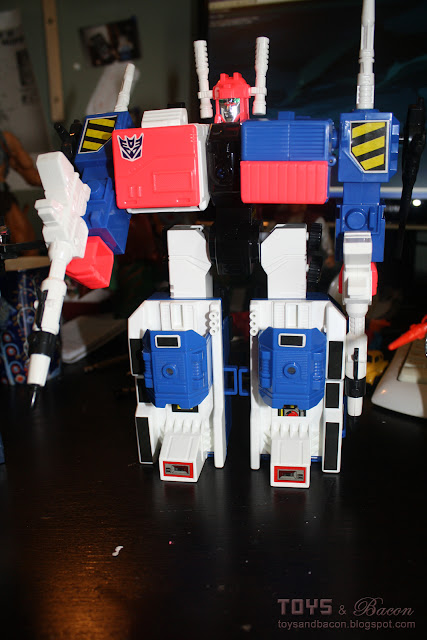 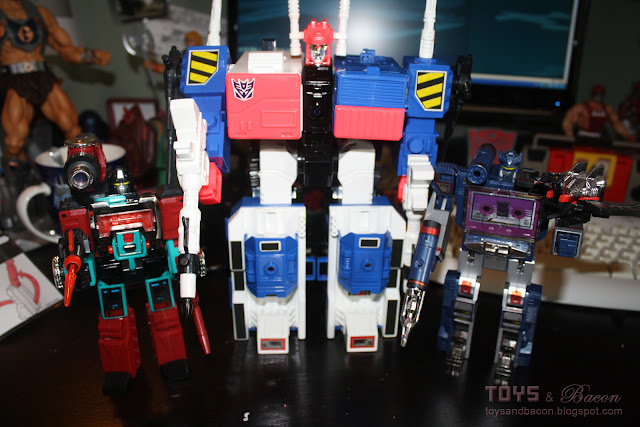 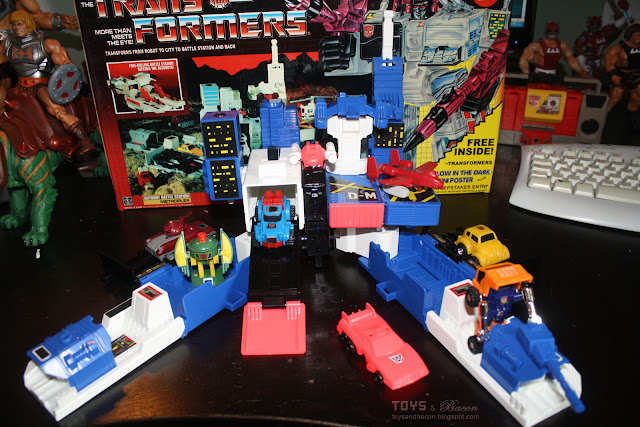 Of course, you will notice I've placed Autobots on Metrotitan - a Decepticon. That's ok. After all, he did come in a Metroplex box.
Fun toy. Not the real deal, but as long as you know what you're getting, and as long as Hasbro/Takara has no intentions of making an Encore or re-issue version of Metrotitan, this is the way to go. Would I play like this with a real Metrotitan? Probably, but I would always have in mind that it was a $500 toy I was playing with.
Enjoy your weekend.
Posted by Jon at 9:25 AM