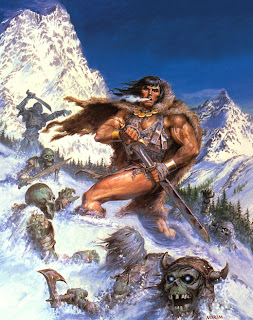 I was chatting with a friend, a fellow fanboy. He's heavily into Conan the Barbarian, and fantasy in general - among other things. He showed me a link to a fan page for artist Earl Norem.

Here are the Conan covers. So many epic pieces, it blows my mind. Conan getting jumped by frozen dead soldiers is a great example of Norem's style.
http://earlnorem.com/conangallerypage.html

And here's the link to the MOTU part: http://earlnorem.com/motugallerypage.html

A piece that fascinated me was this one:

It says "the jungle is the setting of this battle between He-Man and Skeletor". Clearly. Except it's not really a jungle, more a savanna. Crazy as it may seem, this image actually makes sense. They are the Masters of the Universe, are they not? It makes sense that they do battle all around the universe, not only on their planet, Eternia.

Indeed it's He-Man vs. Skeletor, the World Tour.

He-Man has found a stand-in for Battle Cat, and Skeletor has found suitable minions. All though I suspect the IQ level of his new horde are a significant improvement over his usual gang of losers. 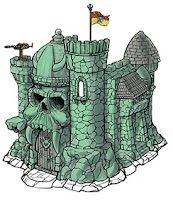 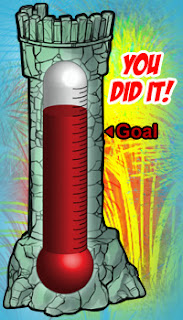 In related news, Mattycollector got the satisfactory amount of pre-orders for Classics Castle Grayskull. Their nifty thermometer may have been a clever marketing trick, but honestly, I found it exciting and fun.

Now we wait. Rest assured, for the price we're paying, enthusiast will be ready to complain over every single detail that gets revealed, up until release late next year. But at the same time, it's good to see so many fans be really happy about the news that we're getting Castle Grayskull. It's safe to say that it's been the highest demanded toy in this line, and I'm sure it will please almost all of us.

You can pre-order Castle Grayskull over at mattycollector.com up until January.
Posted by Jon at 9:33 AM