As I'm back home for a birthday celebration, this will have to be a short one. But non the less an interesting - and for me, an extremely potent experience as a toy collector. Basically, this is the story about one that got away. Storm Shadow. The ninja. 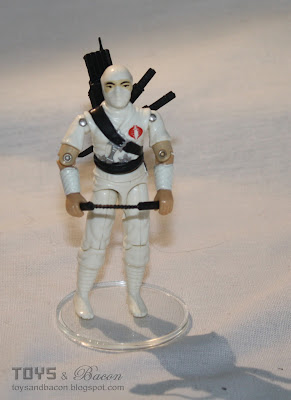 Storm Shadow was released to the toy stores in USA in 1984. He didn't come to Norway until '86, and was discontinued in around 1988-1989. But we all know that some toys sat on shelves for months after being discontinued. Years even. Only last year, I heard about a guy who found 1994 Joes in the far back of a provincial toy store. Typically, the toys that sat on the shelves that long wasn't the popular ones. They were the boring, filler characters, the wacky toys, the extremely expensive ones.

Storm Shadow was really neither. He was, and continue to be one of the most popular characters in 80s pop culture. He sold out, even in Norway. He was a fantastic action figure in every way, he was a cool character in the comic, and as a toy he came packed with great accessories. A deliciously simple, yet detailed sculpt. Magnificent card art, and a relatively low price. Kids loved the white ninja.

So I had really no expectation of finding him in my stores by 1990, when my interest for Joes really kicked in. I had already read about Storm Shadow in the comics, and he was by far the coolest character, in my opinion. He was sort of a villain, yet still able to fight alongside his ninja buddy, Snake Eyes. After a while, he even joined the G.I. Joe team, in their battle against Cobra, his previous employer/captor. 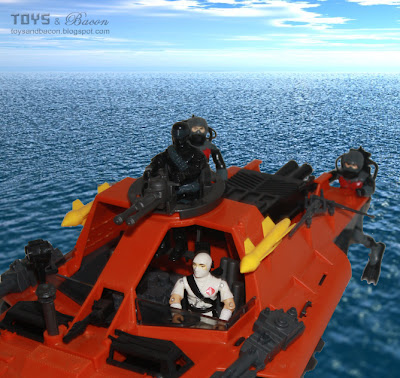 But there we were, on a holiday in Denmark, me, my sister and my parents. Just doing a pit stop for gas and food, before heading off further down the highways of Europe. I fulfill my duties as a kid, and instinctively head straight for the nearest toy store. This wasn't even a real toy store. It felt more like the good umold fashioned multi-purpose store. They had a little bit of everything.

Near the exit, in a crate, I come over a bunch of Joes. This wasn't all that surprising. In Norway, Denmark and the rest of the western world, G.I. Joe was a pretty popular toy line. But I immediately notice that something is different. These figures are far too old to be in store. These are the discontinued figures from a couple of years back. I had never even seen these in stores. I panic. I frantically search through the lot, craving pretty much every single one of them. I know that's out of the question, but I may be able to get one or two of them from my parents...

And that's when I find him, near the bottom of the bin. Storm Shadow. On clearance sale.
I shouldn't be this lucky. And I wasn't either. I ran out, trying to find someone with the money to buy me the grail, but my father couldn't be bothered, and my mother wasn't nearby.
I was never the type of kid to cry when I didn't get a toy I wanted - because, honestly, I got a shit ton of toys. This wasn't the case with Storm Shadow either. The very next day, we stopped in Germany, and I got the two-pack with the Crimson Twins - toys I still have to this day, and I had momentarily forgotten about the Cobra assassin.

But it has always been there, the memory of the one that got away. A reminder that I should be better at jumping opportunities that arises, and that I should always have saved up a couple of coins, should a fantastic toy deal come around.


Epilogue:
I never got Storm Shadow as a kid. A friend had him, and I was really jealous, but at the same time, at least I got to play with him from time to time. And honestly, it adds to the mythology of the toy that I never had him myself. So what happens when I become an adult and notice that it's possible to buy old toys through the internet? I get myself a couple of pristine examples of Storm Shadow. No big deal, just getting my self the grail. Satisfying? Sure. The surge of nostalgia, the possession of a wonderful toy. It's all there. But it doesn't make me forget that I had it in my hands two decades earlier.
Posted by Jon at 3:46 PM

It is remarkable how a common item brings us together. While we all bring our different backgrounds going into our hobby, we meet at one point (in this case, Storm Shadow), and yet we all have different outcomes that are all unique to each and everyone of us.

One toy figure, so many personal experiences from that one thing.

I would spend the night at my cousin's or he'd stay at my house nearly every weekend as kids. We'd loan each other our guys during the week lots of times. One week he loaned me Storm Shadow, and nearly 25 years later, I can still remember taking him to kindergarten with me, posing him and setting him on my bedside table at night, and bringing him to the dinner table while I ate. My cousin traded him to a kid at his school after I returned him, and I never saw a 1984 Storm Shadow for the next 24 years. Until this spring, when I got mine on eBay for about 35 bucks. I was thrilled when I got it, even at 30 years old!

Great story, Bill! I bet it felt fantastic, brought you back, a surge of nostalgia.

And as an adult, I suspect you also appreciate Storm Shadow for many other reasons, like noticing all the cool details, and the amazing quality of the action figure, when compared to the contemporary toys.

Great story. Ah Storm Shadow...Probably one of my favorate G.I. Joes and I lost him. There was an area under a long row of buildings in the apartments I lived. I used to run under there and play there all the time. It was really diverse.It went from rocks, to a small stream, to beach sand...All an imaginative kid could hope for. Anyway I was playing one day, burried Stormshadow in the beach sand and lost him. LOL heartbreak. I used to look look everytime I went back, but I gave up eventually...A few years later and we're moving that day, so I run that obstacle course one last time for old times sake and I decide to look one last time. And there I find Stormshadow a little discolored, but still intact. Sorry you didn't get a happy ending too lol.

I grew up in Hungary, and Storm Shadow was my first ever G.I. Joe figure. I received it for Christmas, when around '89 or '90. This was the other version, white with grey stripes. We lived in a small town, I haven't even seen any G.I. Joe toys in the stores, only in tv commercials. My mom must have picked it up in Budapest. I quickly became the most popular kid in school with it, and a lot of my friends received later the same figure, because they liked mine so much. I didn't have many Joes growing up, and now that I have quite a big collection of them, Storm Shadow is still my favorite, and I treasue my old, loose and yellowed figure.

I noticed on your overall list of best GI Joe figures you had Storm Shadow in his white and grey 'camo' much lower on your list, and the original in your top picks. While I appreciate the original (and I had both), the later version looks, functioned, and was more fun than the original. Aside from aesthetically looking better (color of clothing, his hood having definition, etc) he also came with nun-chucks, a sword, and these awesome hand claws! Same went for Cobra Commander. While his dark blue hooded look was one of the best, his silver and light blue armor version was the best.

I put Storm Shadow V2, Cobra Commander in Battle Armon (V3), Alley Viper (w/ his combat gear, helmet with visor, shield, etc) and B.A.T.S as the top GI Joe figures ever made! They looked awesome, and if you had all four, your team was unstoppable .... except against your bratty brother/friend who could NEVER lose and somehow found a way to simply 'win' every single damn time you played no matter what!!! ----- we all had one of them! Some of us may have BEEN one of them even!!

I got Storm Shadow as a Christmas present. I was so insane with expectation, I went to the Christmas tree beforehand and unwrapped just enough of the package to verify it was him. Inspired by some ninja movies my friends and I watched on VHS tapes, I took a magic marker to change his outfit from white to all black. I also used an X-Acto knife to remove the throwing stars from Scarlett's forearm as a gift to him. Decades later, I still have some scars on my fingers from doing that. It was worth it; Storm loved throwing them at people.